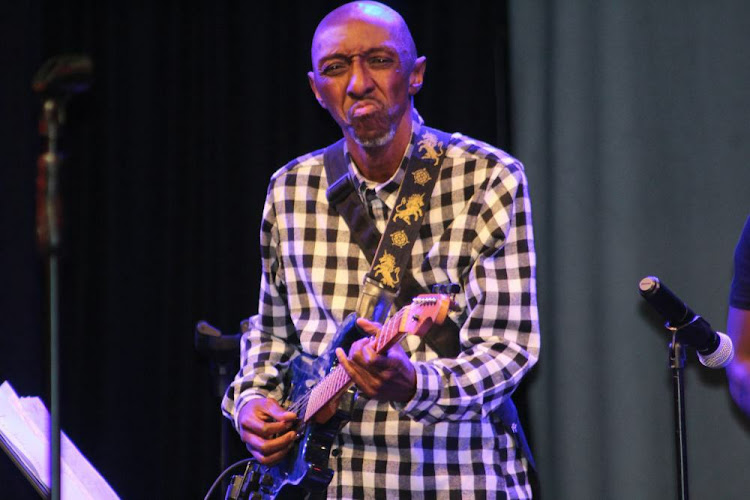 The Nelson Mandela Bay music fraternity has been dealt a heavy blow following the death of legendary guitarist Lawrence Matshiza.

Matshiza, 60, died at Livingstone Hospital on Sunday after a long illness.

His wife of 11 years, Nomvuzo, said the musician’s health had slowly deteriorated before he was admitted to hospital about three weeks ago.

To his wife and five children, Matshiza was a peace-loving family man who wanted everyone to be happy.

Nomvuzo said that during his final days, Matshiza insistently wanted to see his youngest son, Simamnkele, with whom he had a close relationship.

However, the hospital would not allow visitors inside.

“I won’t lie, I am devastated by his passing but I have to be strong for the kids,” Nomvuzo said.

“Two of them who live in Johannesburg have not arrived yet and I don’t know how they will be.

“I had a very difficult time comforting the last born until my sister-in-law intervened.”

To fellow musicians and music lovers, Matshiza was a legend, though he downplayed his standing.

An impeccable guitarist and producer with a special ear for good music, younger Gqeberha musicians often looked to Matshiza for guidance before they released their own music.

Many describe him as a mentor who carved a path for Bay musicians, among them Sizwe Yaze.

“From then on, he just became my mentor and more than just someone who was doing my album.

“He became a part of the band itself and instilled his experience onto my music.

“He became a friend and a father to all of us,” Yaze said.

Yaze described Matshiza as a selfless legend who constantly shared his knowledge.

“He had done it all — he had travelled and worked with the best and the worst musicians, but his humility spoke volumes because he could work with anyone and in good spirits,” he said.

Yaze was among a group of Bay artists who recently honoured Matshiza in a special concert in April and again as part of the National Arts Festival earlier in July.

S’bane, an all-women quartet paid tribute to various South African music legends, including Matshiza, by performing some of their classic songs in a cappella style.

Yaze, who managed the project, said he was glad to have honoured Matshiza while he was still alive.

Born to musician parents — his father a drummer and mother a singer — Matshiza got his first guitar made from a cooking oil tin at the age of nine.

He spent the early years of his career in Gqeberha, forming a band called Afro-Teens with the likes of Rebbeca Malope’s long-time gospel producer, Sizwe Zako, and played with Bay bands Tulips and Black Slaves, and musicians Jury Ntshinga and late mama Dineo Lebakeng, among others.

Matshiza was then invited to Johannesburg by late playwright Gibson Kente in 1970 to join one of his productions.

There, the guitarist met his wife.

He has since produced, written and played for scores of celebrated musicians, including Judith Sephuma, Ringo Madlingozi, Siphokazi Maraqana, Hugh Masekela, the Tshwane Gospel Choir and Pat Matshikiza, among others.

Among countless accolades, Matshiza was honoured by the department of arts and culture with a lifetime achievement award in 2014.

He returned to the Bay in 2013 and has since dedicated his time to the development of talent in the city.

One of his dreams, Matshiza told The Herald in 2020, was for his home city to have enough music schools and recording studios to nurture its talent.

Matshiza leaves behind two siblings, his wife and five children.

The funeral details have not been finalised yet.