Phoenix man was crushed to death by taxi rushing to loot mall: eyewitness 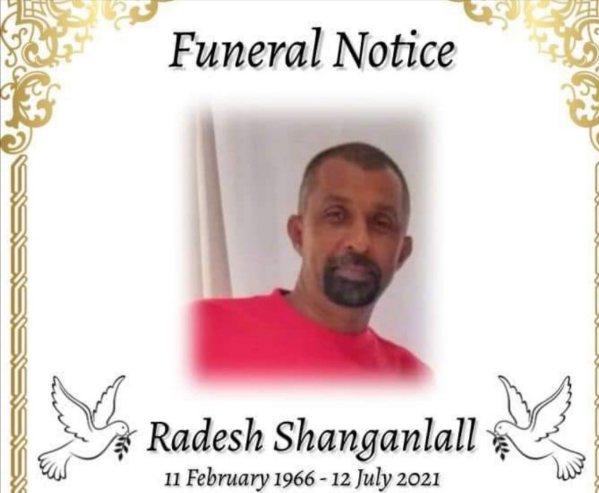 The funeral notice for Radesh Shanganlall, who died near his Phoenix home after allegedly being hit by a speeding taxi last Monday
Image: via Facebook

A speeding minibus taxi allegedly ploughed into and killed a Phoenix man while he was discussing wanton looting in his area with neighbours a week ago.

Radesh Shanganlall, 55, of Southgate, was laid to rest on Sunday after his family was forced to wait for crematoriums to reopen following the unrest that gripped KwaZulu-Natal.

Eye-witness Gary Govindsamy told TimesLIVE he and Shanganlall, his son and another neighbour were discussing the looting taking place at their local shopping centre last Monday when the tragedy occurred.

“While we were on the corner of the road, Radesh, his son, another neighbour and myself were standing within metres of each other when we noticed a taxi, with its number plates removed, speeding towards the shopping centre.”

Govindsamy said the driver managed to avoid a car parked on the road and a group of about 10 people.

“The driver wasn’t able to control the vehicle. He hurtled towards us, hitting Radesh and his son at high speed. Our neighbour was hit by the side mirror and the vehicle missed me by inches.

“The driver only stopped after he rammed the vehicle into a tree. Radesh was almost pinned under the taxi.

“There was not a single sound from him. No screaming, not a whine, nothing. He died after a few minutes. He was mangled. It was traumatic.

“We were helpless. We managed to get his wife to the scene and she was hysterical.”

He said his distraught wife prayed for her husband while he writhed in pain.

An ambulance arrived shortly before he died but paramedics could not do much to save him.

Govindsamy said the taxi driver fled the scene and a case of culpable homicide has been opened.

Shanganlall’s motorcycle club formed a guard of honour at his funeral.