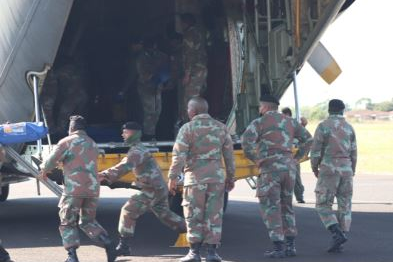 Members of the Maritime Reaction Squadron offload equipment from a C130 transport aircraft after landing in Durban as part of the military's deployment of forces to quell violence in the province.
Image: SANDF

Thousands of SANDF troops are pouring into KwaZulu-Natal en masse on Friday by air to help stabilise the violence-torn province.

Early on Friday morning, members of the navy’s Maritime Reaction Squadron flew into the province, according to social media posts by the SANDF.

Under Operation Prosper the military is deploying 25,000 soldiers, including reserve force members, across KwaZulu-Natal and Gauteng, which has also been gripped by deadly violence.

Since the incarceration of former president Jacob Zuma last week Wednesday, violence has gripped the two provinces, with looters going on the rampage pillaging and destroying businesses primarily located in shopping malls.

In a post on LinkedIn on the Maritime Reaction Squadron deployment, the SANDF said that the forces would be used to bolster Joint Operations Tactical Headquarters in KZN.

Captain A Tamela said in the post: “The naval component will be reinforcing forces deployed in KwaZulu-Natal, in an effort to protect the government’s critical infrastructure and prevent sporadic incidents of violence, burning of buildings, road blockages and looting.

“All these forces deployed in KwaZulu-Natal are assigned to work in co-operation and in support of the police. The deployment of the SANDF is to provide protection for members of the police and other law enforcement agencies.” 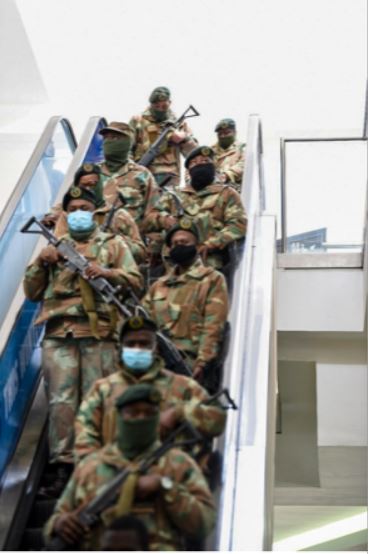 In Gauteng, the SANDF has deployed forces across Soweto, Alexandra, Tembisa and Mamelodi.

In a LinkedIn post, Col Modikana Langa, senior staff officer in the Medical Support Operations, said 400 personnel, including doctors, nurses and operational emergency care practitioners, had been deployed to support ground forces in both combat and non-combat roles.

“We have also deployed medical air evacuation capabilities. Our forces will be based in both Gauteng and KwaZulu-Natal.”

The SANDF shared on Twitter that troops were deployed at Chloorkop, Thembisa and had conducted night patrols at Ivory Park on Thursday night in support of the SAPS.

On Friday morning, troops were deployed at the Menlyn Shopping Centre in Pretoria and Johannesburg's Alex Mall.