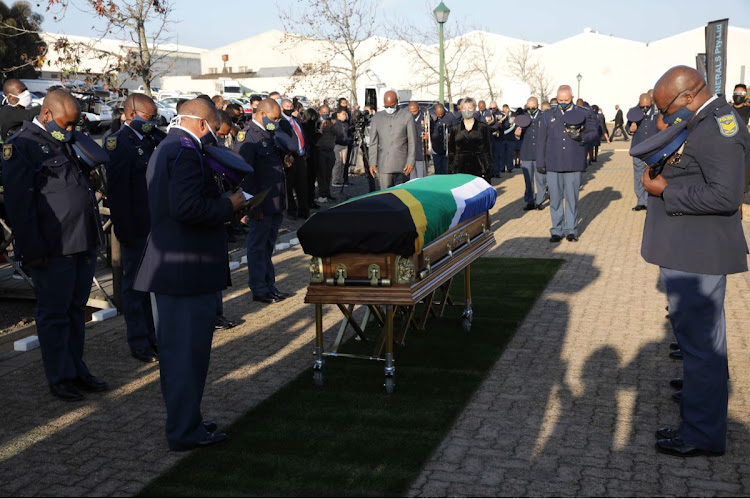 Those close to iconic actress Shaleen Surtie-Richards struggled to fight back emotion as they shared how her 'larger than life' personality has left a lasting footprint on their lives.

Mourners gathered at the Durbanville Memorial Park in Cape Town on Sunday afternoon for a special category 2 special provincial funeral.

The veteran actress was found dead in a guest house in Cape Town on June 7 where she was staying during the filming of the TV series Arendsvlei.

Michelle Surtie De Bruyn took to the podium to speak on behalf the family. She fondly referred to Shaleen as her aunt, and reminisced about how the star's colourful personality impacted on her childhood.

“We knew auntie Shaleen was famous but this week we found out how much she was loved. Shaleen Surtie-Richards was not a star because of the characters she played but because of her ability to inspire people to believe they could be anything they wanted.”

Michelle added that Shaleen used stories from generations before them to inspire them into adulthood and she, herself promised to do the same with the younger generation.

She said Shaleen “always stood in her truth” and challenged others to believe in themselves.

Shaleen's friends took a trip down memory lane to reflect on the star's decades-long career and how she took the theatre, and acting world, by storm with her “charm, wisdom, heart of gold and humble human nature”.

Taking to Twitter on Sunday morning, arts and culture minister Nathi Mthethwa announced he had joined the late icon's family and the SAPS for the half-masting of the national flag at the Durbanville police station.

Family spokesperson Alistair Isobell said the family had decided to request the provincial send-off due to the important role Shaleen played in the coloured community and creative industry as a whole.

“We believe that Shaleen has been an advocate, ambassador and a voice for the coloured community throughout SA as to what can be accomplished, as well as an inspiration to many aspiring actresses, including being instrumental in ensuring that the young female coloured community know that any and all goals can be reached through dedication and hard work,” he said in a statement.

In the wake of speculation surrounding the cause of Shaleen's death, the family slammed rumours that she committed suicide.