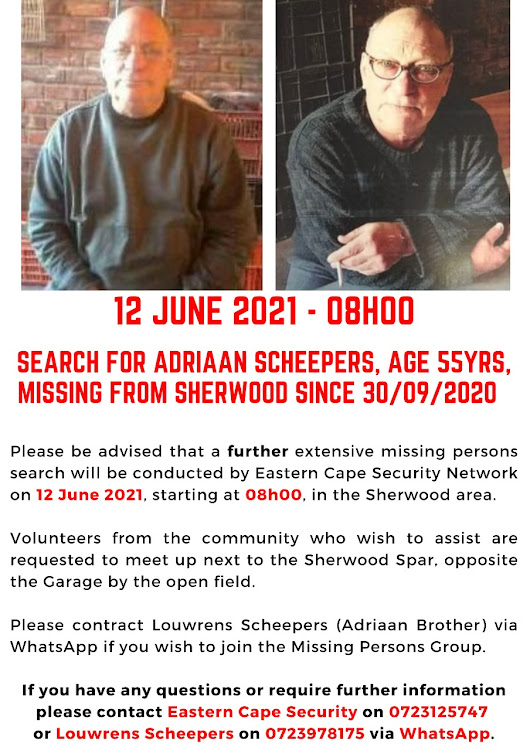 MYSTERIOUS DISAPPEARANCE: The final search for Adriaan Scheepers, who went missing eight months ago, is being held on Saturday
Image: SUPPLIED

The final search for Adriaan Scheepers, who went missing eight months ago, will be held on Saturday.

The family of the 55-year-old are urging the community to lend their eyes and ears in assisting during the final search, which will be co-ordinated by the Eastern Cape Security Network.

The father of two disappeared from his Sherwood home in September.

He was spotted by a policeman on the morning of the day he disappeared, walking down Shropshire Street, near Harlech Street, where he lived.

However, there has been no sign of Scheepers since, despite an ongoing investigation by police and a co-ordinated search in April involving more than 100 Gqeberha residents.

His brother, Louwrens, is hoping for a similar turnout tomorrow and while he acknowledges the chances of finding Scheepers alive are slim, he said finding his brother’s remains would bring closure to the family.

The search will begin at 8am and volunteers are asked to meet on the open field opposite the Sherwood Shell garage along Walker Drive.