WATCH | 'Jessicah, we are live' — awkward live TV moemish has the streets in a mess 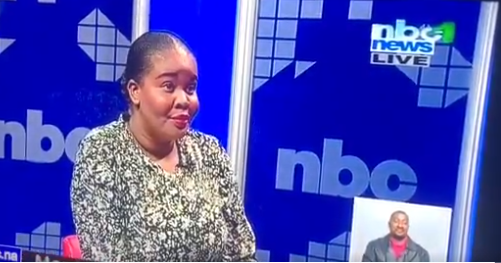 NBC Africa host Elmarie Kapunda was not impressed during the broadcast.
Image: Twitter/ Shadows of Wolf

Social media users cringed in unison on Wednesday after a video of an awkward moment between two presenters went viral on social media.

In the video NBC Namibia News presenter Elmarie Kapunda can be heard speaking about a boxing match, before turning to sports presenter Jessicah Kaimu.

Kaimu interrupts her, saying: “No. We are not going to do that. You’re just going to greet me and say 'take it away'.”

There was an awkward pause before Kaimu is told that they are “live”.

The two then stare in silence until the broadcast is cut.

An account in Kaimu's name, which celebrated her first live broadcast on the show last year, did not comment on the incident.

EFF MP Mbuyseni Ndlozi was among those in stitches at the video and said it was the “Jessicah, we are live” moment that had him defeated.

Others shared hilarious memes and jokes about the incident.

Lady: " We are live"
Jessica : " I thought you said we are alive" pic.twitter.com/5oZHKnfuMP

Who was wrong on the ‘Jessica we are live’ day? (25marks) #jessicawearelive pic.twitter.com/89XUQh71om

#Jessica we are live

The camera man : I neva experiment this🤣🤣🤣🤣🤣🤣😅 pic.twitter.com/JBBjh9HNsw

"Jessica we are live" things got tense very quick😭😭 pic.twitter.com/gXTWxEVGtL