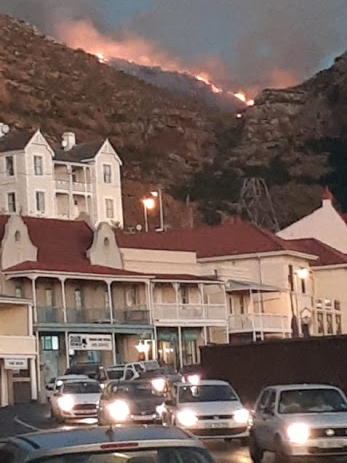 Two helicopters are being used to help contain a fire above Simon's Town.
Image: Supplied

Cape Town firefighters were battling a blaze above Simon’s Town on Monday.

The fire has so far not threatened homes and is burning near a popular hiking route called Admiral’s Kloof. It was first reported in the early hours of Monday morning in the Red Hill area.

“We have 10 firefighting appliances and about 50 firefighters on scene, being assisted by Table Mountain National Park and a crew from the navy,” said Cape Town fire and rescue spokesperson Jermaine Carelse.

“Two Oryx helicopters were requested from Ysterplaat Air Force base to assist with water bombing. The fire area has been divided into three divisions to make operations more manageable,” he said.

Fortunately, the weather forecast for Monday did not predict strong winds of the kind that fanned last month’s devastating fire on Devi’s Peak and Table Mountain.