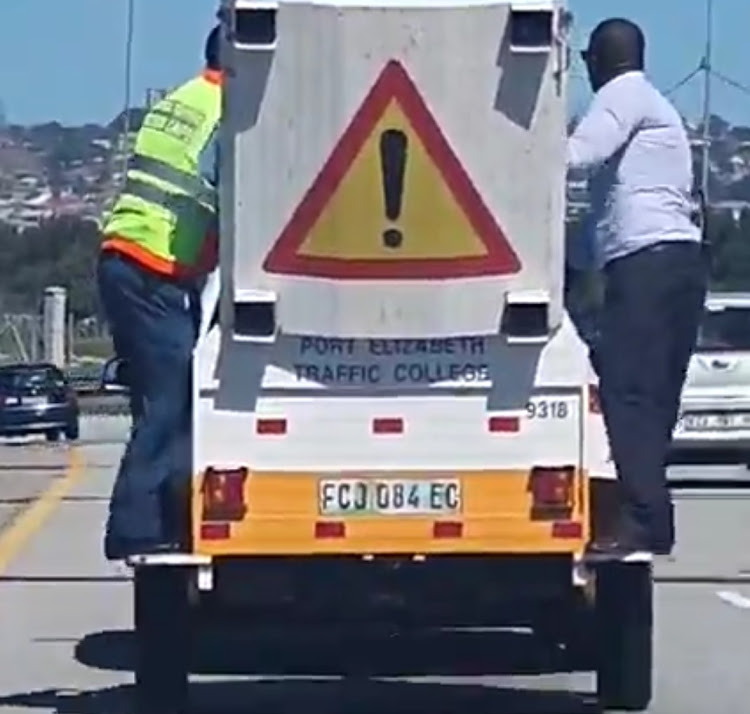 The video drew a lot of criticism, with Facebook users demanding the officials be arrested for breaking the rules of the road.

The M4 is a busy stretch of freeway with motorists either coming from the Bluewater Bay side or others from Deal Party.

The traffic vehicle was videoed driving at a slow speed with two officials, one wearing full uniform and the other dressed formally, clinging onto the trailer.

In a since-deleted Facebook post on the Nelson Mandela Bay Facebook page, a statement read that traffic and licensing director Warren Prins had sufficiently addressed the matter.

The statement read: “We are aware of a video on social media where our traffic officials were busy setting up a roadblock next to the freeway.

“While doing so, they were riding at a slow speed on an adequately marked modified trailer to put up signs, which is a standard operating procedure.

“While reviewing the footage, we noticed that one of our officials did not wear a reflective jacket.

“It was determined that he left church directly to attend to his official duties,” it read.

When contacted for comment on Monday, Bay safety and security political head John Best referred questions to Prins, saying it was an operational issue.