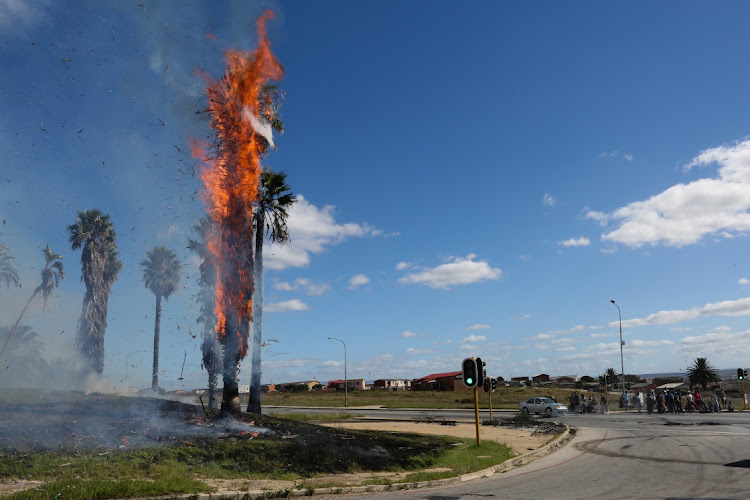 FIRED UP: A palm tree goes up in flames when frustrated community members from Sanctor held a protest in Stanford Road on Monday
Image: WERNER HILLS

Tyres, branches, debris and even three tall palm trees went up in flames in Gqeberha on Monday morning as frustrated Sanctor residents protested on Stanford Road, claiming that broken floodlights had led to an increase in violent crime in their neighbourhood.

According to them, the lights had been broken for more than a year.

According to them, he had made a host of broken promises.

Residents protesting at the intersection of Stanford and Marock roads said floodlights meant to keep the area safe had been broken for more than a year, and the dark streets were now a haven for criminal activity.

Community leader Chad Kramer said at least four people had been killed in Sanctor in recent months, and the community was calling on the city to repair the lights to help resolve the problem.

“We are calling on the mayor to come and see us, to listen to our concerns and to repair the lights,” he said.

“These floodlights have been off for 448 days, and we believe those four lives could have been spared if the area was not so dark,” Kramer said.

The protest started at about 8am with a small crowd trying to block the intersection with stones and burning branches.

Motorists were warned on social media groups to avoid the area.

Empty fuel containers could be seen next to the road and the smell of oil and burning rubber clung to the air.

The road was covered in a layer of slick, dark liquid, possibly motor oil.

Soon after the protest started, a palm tree next to the road caught fire and then the entire length of the towering tree caught alight.

Two more trees were also burnt, and firefighters and police arrived at the scene to douse the flaming trees.

Protesters claimed the trees had caught fire by accident.