Smiles — and some tears — as schools reopen 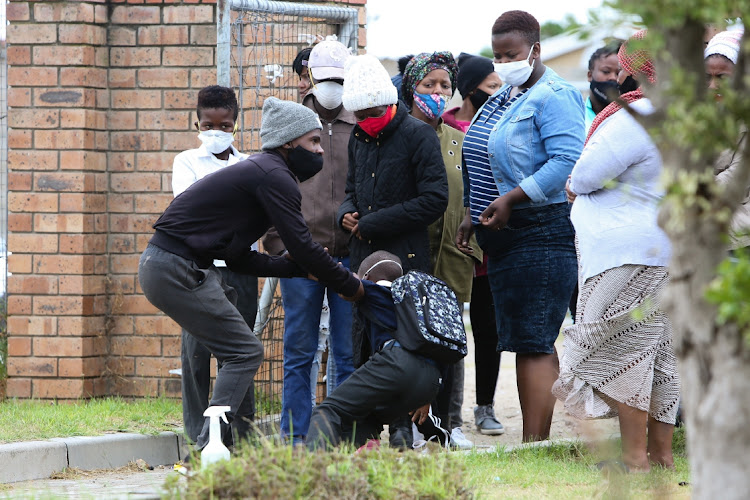 While the usual first-day fears were apparent on the faces of some pupils, it was predominately sanitising and smiles across Nelson Mandela Bay at the start of “big school” on Monday.

At high schools, the majority of pupils said they were just excited to be reunited with their friends after the prolonged school holiday.

And while some schools visited by The Herald raised concerns about overcrowding in classes, vandalism, placement of pupils and Covid-19 protocols on campus, the Eastern Cape education department said it was yet to receive reports of any major incidents or problems at schools in the Bay.

Department spokesperson Malibongwe Mtima said so far, everything had gone according to plan.

“We have troubleshooting teams on the ground to field any questions or complaints from schools and we are awaiting feedback on any problems that could arise,” Mtima said.

“We should be receiving reports during the course of the week and the department will take the appropriate action in each situation.”

PPE for educators and pupils was on hand and most schools opted for a rotational roster to alleviate overcrowding and to implement Covid-19 preventative measures.

In the metro’s township schools, parents seemed to be the ones having trouble letting go as they clung to the fence and watched as their children disappeared into their classrooms.

An anxious Nolwando Manengela said it was difficult to leave her son, who was starting grade R at Mbasa Primary School in Motherwell.

Asked why she was still standing at the gate after her son had been taken into class by his teacher, she said she needed a bit of time.

“It’s his first time in this school and I just want to make sure he is completely fine before I leave him.

“I know it’s been a while since his teacher took him to class but it just feels like if I stand here a little longer, maybe I’ll catch one last glimpse of him passing by, then I’ll be fine,” she said.

Manengela was among a group of more than 20 parents who stood outside after their kids had been taken in.

However, for one his peers, Avuyile Jilimba, it was the inverse.

Just minutes after walking to class, the five-year-old balled his eyes out, slipping through his grade R teacher’s hands and sprinting back to his mother outside the school gate.

Comforting and begging him to return to class, his mother, a teary Yonelisa Jilimba, said she felt her heart break at the sight of him crying.

“He was OK when his teacher collected him, he didn’t even hesitate. He must have seen me preparing to leave and became scared of being without me here.

“He’s new and hasn’t made friends yet, so I think he’s scared,” she said.

Jilimba said she trusted the school to take good care of him, as they did with his older brother, Hlelo Jilimba, a grade 6 pupil at the school.

It was all systems go at Coega Primary School in Wells Estate, Motherwell’s Mfesane High School and KwaMagxaki High School, despite a number of parents and pupils who arrived in the morning for late registration and other admin processes.

A few parents still sought placement for their children in grade 8.

“It’s very difficult to turn people away, especially when they live close to the school. Where are we telling them to go if not this school?

“Thanks to the rotation system, we are able to manage the numbers and avoid overcrowding,” he said.

The streets of Port Elizabeth’s northern areas were considerably quieter on Monday,   compared  with  previous years, as scores of pupils returned to school.

At all the schools The Herald visited in the northern areas, pupils were screened and their hands sanitised before entering the premises.

Abrahams also called out some pupils who needed a haircut.

He said the school was ready for the year and had no challenges, except for having to purchase PPE..

He said the school’s capacity was 850 pupils, but they had registered 200 extra with a few parents still looking for a place for their children.

An anonymous source at Hillcrest Primary School in Helenvale said overcrowding might be an issue, but it would be managed because pupils attend school on alternate days in different groups.

One problem and eyesore is the growing illegal dumping site a stone’s throw from the school.

According to the source, the school management decided in a meeting to employ new strategies to address the dumping.

“We are investigating how we can use the garbage to benefit the school.”

At Gelvandale High School, principal Deon O’Brien said all the pupils were placed in classes.

“It is just a few desperate parents that are still looking for places for their children.

On the issue of staffing, he said: “We never have enough teachers. Classes for the technical vocational stream were added two years ago because Westview could not accommodate all the learners.

“We had to stop that stream here because there are simply no teachers for these classes.” O’Brien said.

Booysen Park High School said everything was done to ensure the school year kicks off without a hitch.

Principal Ivan Martins said the school was the target of vandals during the school holiday.

“Our toilets and five classrooms were vandalised, and lights and electrical wiring were stolen. The damages are huge.”

In Uitenhage, dozens of parents and pupils crowded the entrance to Jubilee Park Primary School to check when their children would attend classes.

Principal Patric Norkee said the new buildings, meant to accommodate the school’s 1,198 pupils, were supposed to be completed eight years ago.

This meant the school had only eight classrooms, and each grade would only attend school once a week.

“At this stage it’s the best we can do. Luckily our parents understand and we have had very little complaints.”

The school welcomed 264 pupils to grade R and grade 1 on Monday, and while most lined quietly waiting to have their temperature taken, others looked toward the school fence with teary eyes, trying to find their parents faces in the crowd of onlookers.

Outside the school Johan Sass said goodbye to the youngest of his three children, Theolynn, who started grade 1.

Sass’s older children, Theolene and Theo-John, will be attending grade 6 and 7 classes respectively, later in the week.

“I would love it if my kids could attend school properly, but ... Any schooling is better than no schooling,” Sass said.

Teachers at Gamble Street Senior Secondary school in Uitenhage said the first few days would be dedicated to preparing pupils, as many did not attend orientation last week.

Marius Kleyn, principal at Sonop Primary School in Despatch, said they were well-prepared for the first day of school and teachers were able to pick up where they left off at the end of last year.