Three held for assault as police battle with alcohol-fuelled revellers 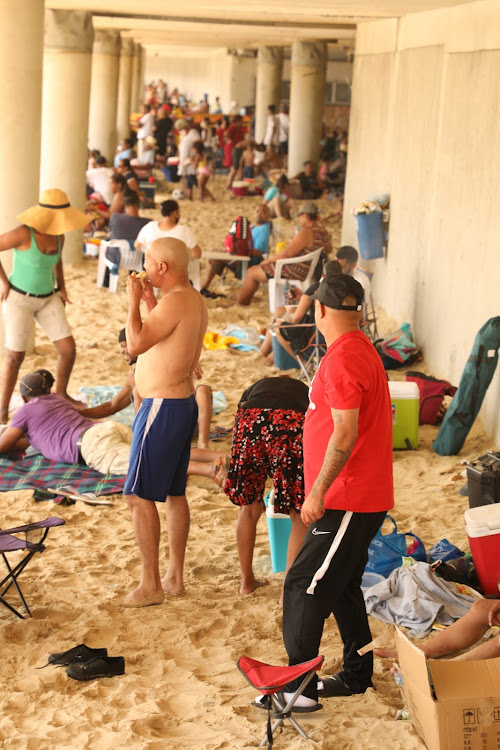 FREE OF RESTRAINT: People fill the beachfront, many not wearing masks or adhering to social distancing rules. Some were drinking illegally in public
Image: FREDLIN ADRIAAN

Three people were arrested after allegedly assaulting a police officer in Port Elizabeth as alcohol fuelled festivities took over several beaches over the weekend.

Emergency medical services reported road accidents in the double digits, with at least one fatality, and say the consumption of alcohol was a contributing factor.

Private ambulance services in Port Elizabeth attended to about 20 car accidents across the metro, ranging from minor collisions to at least one fatality after a car overturned on the N2 near Bluewater Bay on Saturday.

Details of the fatal accident and the deceased were limited.

Law enforcement in Nelson Mandela Bay conducted several operations over the weekend, since they expected an influx of drinking, partying and general contravening of Covid-19 regulations after the beach and alcohol bans were lifted earlier in the week.

“Humewood SAPS attended to a complaint of drinking in public at Shark Rock Pier, Humewood. On arrival the members were met by a group of hostile people.

“The group became disorderly and abusive towards the police. When the members confiscated their alcohol, they were attacked by the crowd.

“Two cooler boxes of liquor were seized. Three females were arrested on charges of common assault and also for the contravention of the Disaster Management Act Regulations,” Soci said.

The Port Elizabeth K9 Unit issued 10 fines to revellers for drinking in a public place at Kings Beach on Friday evening.

Metro safety and security officials conducted operations at various crowded beaches along the coast between St George’s Strand and Maitlands.

According to Rano Kayser, acting member of the mayoral committee for safety and security, officials confiscated and decanted numerous containers of alcohol where beachgoers were found to be drinking illegally.

They also checked for masks and social distancing, and educated people on the risks of not adhering to Covid-19 regulations, Kayser said.

In a separate incident a 50-year-old man was killed after being knocked down by a vehicle on Kruisrivier Road in Uitenhage on Friday.