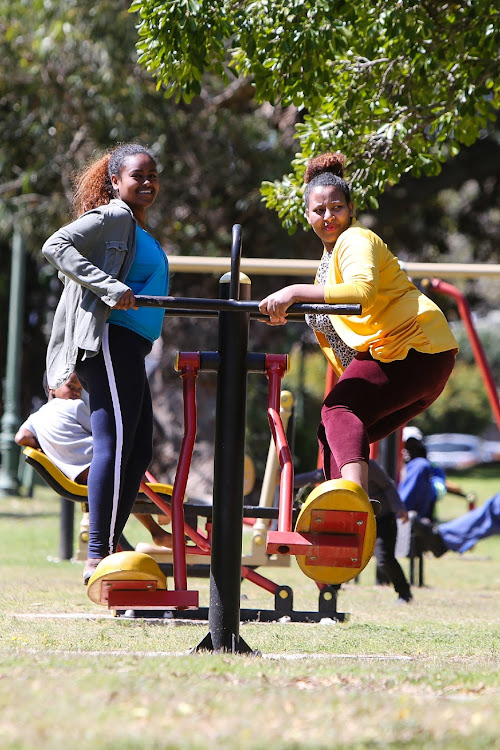 NO WORRIES: Mimie Dasta, 21, left, and Teewot Desaling, 26, enjoy  themselves at St George’s Park, have foregone masks. Desaling says she feels comfortable not wearing a mask because she thinks fewer positive cases are being recorded
Image: WERNER HILLS

At the same time that Eastern Cape health MEC Sindiswa Gomba has warned that the province could see a surge in Covid-19 cases, about 20 people a day are testing positive for the virus in Nelson Mandela Bay.

According to a document sent out by the Nelson Mandela Bay municipality on September 7, seven cases had been reported that day. This had shot up to 19 cases recorded on Tuesday.

The municipal data also showed that between September 7 and September 29, 60 Bay residents had died of Covid-19, bringing the total death toll in the metro to 1,050.

According to the health department report, the total number of positive cases in the city had reached 22,572, with 238 active cases.

According to the report, Ward 7 had the highest number of cases in the past seven days, with 14 people testing positive and two dying.

The ward is made up of Newton Park, Parsons Hill, Mill Park, Glen Hurd and parts of Schauderville, Korsten and Holland Park.

The second-highest number — 10 positive cases — was recorded in Ward 49, Uitenhage.

Dr Siva  Pillay, an adviser at the Nelson Mandela Bay Covid-19 joint operations centre, said that now more than ever people needed to be vigilant as a surge in cases had been seen.

“We need to be more vigilant as we are in level one [of the national lockdown].

“There is far more interaction and you just need one infected person to spread the virus.”

He said he had recently stopped at a farm stall on the N2 where many of the customers were not wearing masks.

“This is the case in shopping centres as well. People are relaxed about this.

“Already, in Europe, lockdowns will be imposed again.

“We need to learn lessons from these countries and do better,” Pillay said.

He said the city had increased screening and teams were working around the clock.

“We are not out of the woods yet.”

Provincial health boss Dr Thobile Mbengashe said he, too, was worried that people were not being vigilant enough.

He said the department was concerned about large crowds seen at taverns across the province.

He called on the police to ensure that liquor traders did not exceed the maximum number of customers and urged communities to maintain social-distancing.

Eastern Cape Liquor Board spokesperson Mgwebi Msiya said he was not aware of taverns being a source of infection.

“We are working around the clock with the SAPS to ensure that such kind of non-compliance does not occur as it may lead to the resurgence of the coronavirus cases,” Msiya said.

“In instances where such behaviour is detected, we urge our people to report it to the nearest police station or call our toll-free number so we can urgently attend to that.

“We are not aware of people being infected after having been at a tavern.

“It will also help us a great deal to get the names of the taverns where there is no adherence to regulations so we can investigate and act accordingly.”

He said a significant number of people had tested positive after visiting taverns.

“Police need to enforce the rules, but [we are] also asking people not to put themselves in danger and to ask the person next to them to put on their mask and tell them not to stand close,” he said.

Mbengashe said preparations made since the first case of Covid-19 in the province had ensured it was ready to tackle a possible second wave.

“Track, trace and isolate individuals. This is very important,” he said.

“We did what we intended, which was repurpose hospitals and make them Covid-19 compliant by improving infection control and renovating them.

“In Port Elizabeth, the VWSA field hospital has 1,500 beds, 300 of which provide care to patients who need oxygen.

“The other component was to oxygenate facilities across the province, and we’ve got 3,000 critical beds because not only did we put in oxygen but we put up machines where we can monitor patients better.

“We now have about 300 ICU beds with ventilators.

“When you think about Covid-19, you need quality information and we’re now able to tell every day who is in hospital, what condition they’re in and we’ve got a digital system that captures that.

“This system enables us to allocate resources efficiently and we’re able to target our intervention to where it is needed.”

Mbengashe said the next six months would be critical as there were still too many people who could be infected if regulations such as social-distancing, washing of hands and crowd control were relaxed.

However, when it comes to wearing masks, some Bay residents no longer see the need.

At the Cleary Park Shopping Centre, some residents were not wearing masks.

Zanokhanyo Marks, 27,  said he would forget his mask at home sometimes and only remembered when he saw others wearing them in taxis or at the taxi ranks, but no-one was enforcing the requirement.

“I think we are all relaxed now,” Marks said.

“I also think things are getting better and infections are low.

“Even around the townships, people are not social-distancing.

“If there is a second wave, it would be a shock because I really think we are out of danger now.”

A slightly embarrassed Ferreira Demingo, 35, who was also not wearing a mask,  said she would normally remove it as soon as she left the shops but that this did not mean she believed the virus was gone.

“I still wear a mask but only when necessary now,” she said.

“If I am at home with my family, I relax a bit but we still sanitise and wash our hands.

“My husband does not go out to chill at the taverns. He can buy his alcohol and come home.

“We teach our children to also continue being safe.”

At St George’s Park in Central, Teewot Desaling, 26, said she was comfortable not wearing a mask as far fewer cases were being recorded.

On Tuesday,  Gomba said health officials were concerned about a second wave of Covid-19 infections spreading into the province, predominantly from the Free State.

Their fears stemmed from an outbreak of infections at schools in areas bordering the Free State, with Gomba describing the new wave as “fires that are spreading fast”.

She said cases were increasing in Aliwal North, possibly as a result of people who shopped and lived in the town but worked in a Free State prison, Goedermoed, which was badly affected by the virus.

Last week, it was reported that the department of education had sent a team to help the residents around Ethembeni Secondary School in Burgersdorp, where 102 schoolchildren had tested positive for Covid-19, putting more than 500 pupils and teachers in quarantine.

Gomba said in nearby Middelburg, 192 active cases had been recorded in schools, with two people dying.

Is SA seeing a drop or rise in Covid-19 numbers under level 1? Here is what authorities say

SA is one of 16 countries that have shown an increase in Covid-19 cases.
News
1 year ago

There have been 1,767 new Covid-19 infections confirmed in the past 24 hours, health minister Dr Zweli Mkhize said on Wednesday.
News
1 year ago