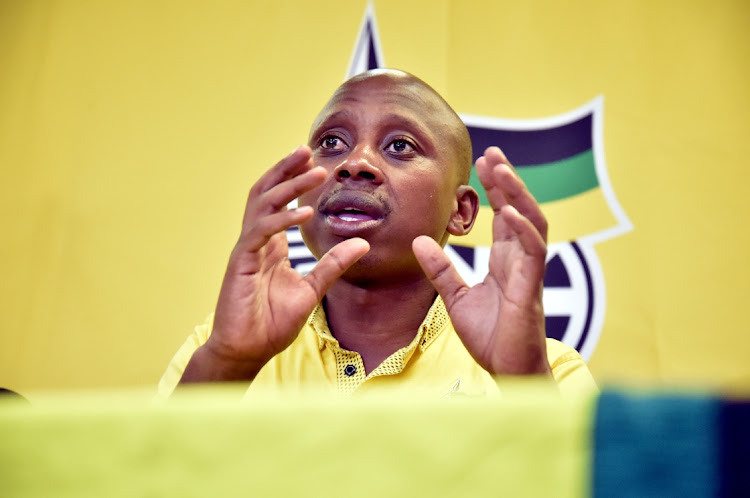 PAYING THE PRICE: Nelson Mandela Bay ANC councillor Andile Lungisa has been suspended by his party due to his conviction for a brawl in council in 2016
Image: EUGENE COETZEE

Andile Lungisa has been suspended as a member of the ANC due to his council brawl conviction dating back to October 2016.

Lungisa, a Nelson Mandela Bay ANC councillor, was served with the letter earlier on Tuesday in Port Elizabeth.

“It is true. He was served with the letter,” he said.

Magqashela said Lungisa was suspended as the ANC’s national executive council (NEC) decided anyone with a conviction should resign for the sake of the party.

“He has a sanction and has been convicted. His judgment is not pending. The NEC said those who have been judged by a court of law must resign.

“Lungisa has a criminal record and was found guilty by a court of law having fought in a council chamber.”

Lungisa could not be reached for comment at the time of writing.

Nelson Mandela Bay ANC Andile Lungisa has taken the stand in the Port Elizabeth Magistrate’s Court where he has been charged with assaulting a fellow councillor. Lungisa is charged with assault with intent to cause grievous bodily harm for allegedly attacking fellow councillor Rano Kayser, a DA member, with a jug. The brawl – captured on video by DA PR councillor Renaldo Gouws - broke out during a heated council meeting on October 26, 2016.

The Supreme Court of Appeal (SCA) in Bloemfontein is still considering Lungisa’s appeal against his effective two-year sentence for assault.

He was found guilty of assault with intent to do grievous bodily harm after he intentionally smashed a full glass water jug over an opposition councillor’s head during a council brawl in October 2016.

The SCA had only granted him leave to appeal against his sentence. His conviction stands.

While Lungisa’s lawyers have argued the sentence was shockingly harsh, particularly for a first-time offender, and that he was being sacrificed on the altar of deterrence, the prosecution believes the sentence to be appropriate.

It is not clear when a decision will be made.

Asked if his sentence could be reduced and if the suspension would be lifted, Magqashela said: “We will cross that bridge when we get there. We don’t have anything personal against Lungisa.”

“Society has a direct interest in the proper functioning of municipal councils and the behaviour of councillors.”
News
1 year ago

Nelson Mandela Bay ANC councillor Andile Lungisa remains confident that his two-year sentence for assault will be overturned as a date for his matter ...
News
1 year ago

‘Why Lungisa should not go to jail’

A comment by a judge - that she may have imposed a lesser sentence on Andile Lungisa -  and fears that he had been sacrificed on the altar of ...
News
2 years ago

Scarring, a deteriorating speech impediment and post-traumatic stress disorder (PTSD) as a result of being hit over the head with a glass water jug ...
News
2 years ago

A Port Elizabeth principal, left bloody after he was allegedly smacked in the face with a glass jug by one of his teachers, will appear alongside her ...
News
3 years ago