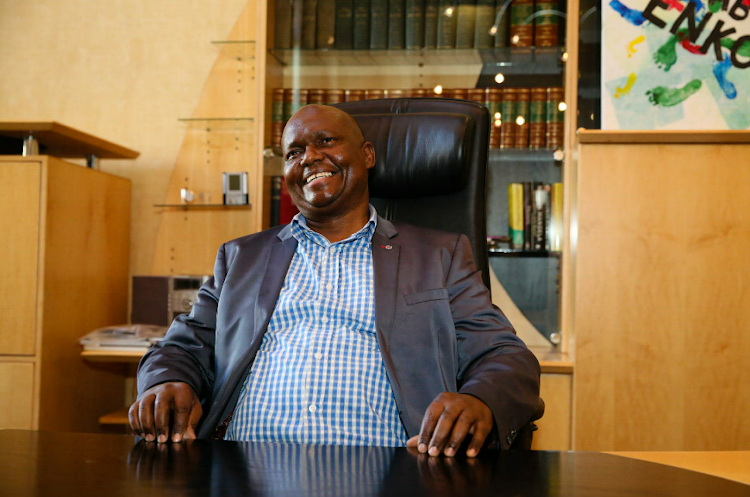 Former mayor Mongameli Bobani is set to make a comeback into the Nelson Mandela Bay mayoral committee to head the city’s infrastructure department.

He will replace ANC councillor Andile Lungisa, who was forced to step down from the position until his court case has been finalised.

The decision to bring back Bobani was made at a meeting of coalition partners — the AIC, UDM, United Front and Patriotic Alliance, in the absence of the ANC — on Monday afternoon.

It is understood that representatives of the EFF also attended the meeting.

The ANC’s regional co-ordinator, Luyolo Nqakula, said they learnt about the decision after.

“We wish to state clearly that we outright reject this appointment,” he said in a statement.

“The ANC in Nelson Mandela Bay will never support any decisions taken by the Black Caucus which is not born out of engagement and consultation, especially in a position which was occupied by the ANC as an organisation.

“As such the ANC views the action of the Black Caucus as undermining to the ANC as an organisation. The ANC will interact with this development comprehensively and pronounce itself to that effect.”

The decision was a strategic move as the council is set to debate the election of a new mayor next week.

Thsonono Buyeye has been acting mayor since Bobani was ousted in December 2019.

Bobani said on Monday that Buyeye had approached him to serve on the mayoral committee as head of infrastructure and engineering — the department with the largest budget which is the custodian of water, electricity, sanitation and stormwater infrastructure.

“The acting mayor called me this afternoon and informed me he’s decided to put me in Lungisa’s place and I accepted.

“I accepted because the department has a huge challenge and he didn’t want a gap in that department and after consulting with my party, I accepted,” Bobani said.

The council will be debating Buyeye’s future at a council meeting on August 13 amid threats by Eastern Cape Cogta MEC Xolile Nqatha to place the city under administration and dissolve the council if a mayor is not elected and a new acting city manager appointed.

Bobani said his aim was to hit the ground running as the department had many challenges.

“That’s a huge department. Even you, you didn’t have electricity and there’s a huge challenge.

“We’re in a crisis as a metro, there’s no water. Those are the most important things, and I must ensure to look at it and fix it.

“People are complaining over stinking drains. The most important thing is to hit the ground running.

“Tomorrow [Tuesday] there’ll be a handover.

“I’ll start where Lungisa left off and I’ll ensure to deliver the best services for the people. It’s not a new thing, we’ll ensure to attend to resident’s complaints.

“It’s going to be a challenge and I’m ready for it.”

Bobani said he would not entertain politics but would focus on his work and keep residents informed on progress made in addressing and fixing water leaks.

Meanwhile, DA councillor Nqaba Bhanga said speaker Buyelwa Mafaya had kowtowed to pressure to place the election of a mayor on the agenda.

“Though the DA welcomes this decision, we will continue with our urgent application in the Port Elizabeth High Court.”

The DA submitted an urgent application in the high court on Friday in a bid to compel Mafaya to call a council meeting.

The court action will be heard on August 11 and comes after the party’s letter to Mafaya last week went unanswered.

The letter requested that she call an urgent council meeting for Monday to elect a new mayor, appoint a qualified and competent acting city manager and address concerns raised by the National Treasury.

“The DA launched the urgent application to have the court compel the speaker to call a council meeting to elect a mayor, appoint a qualified and competent acting city manager, and address the concerns of National Treasury,” Bhanga said.

“The meeting must also discuss the letter from Nqatha to the self-styled interim mayor, Thsonono Buyeye, wherein he states his intention of placing the metro under administration,” Bhanga said.

Nqatha received a thumbs-up from the province’s executive council when he asked that the Nelson Mandela Bay council be dissolved.

Buyeye’s spokesperson, Siyanda Mxotwa, would neither confirm nor deny anything and said an official statement would be issued on Tuesday.