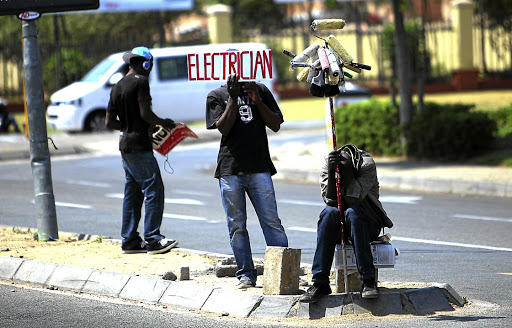 A dozen academic papers released on Wednesday have laid bare the extent of the damage wrought by Covid-19 on employment levels, healthcare access and food security.

The grim picture in a nutshell: three million South Africans lost their jobs between February and April and almost half the population ran out of money to buy food.

A national consortium of 30 social science researchers from five universities convened just before the start of lockdown at the end of March to conduct  the National Income Dynamics Study-Coronavirus Rapid Mobile Survey (Nids-Cram) from May.

Nids-Cram is a broadly representative panel survey of 7,000 SA individuals conducted every month. The same person is phoned each month and asked a range of questions on their income and employment, their household welfare, receipt of grants, and their knowledge and behaviour related to Covid-19

The research culminated in the release of the 12 reports on a number of topics, including employment, welfare and health. 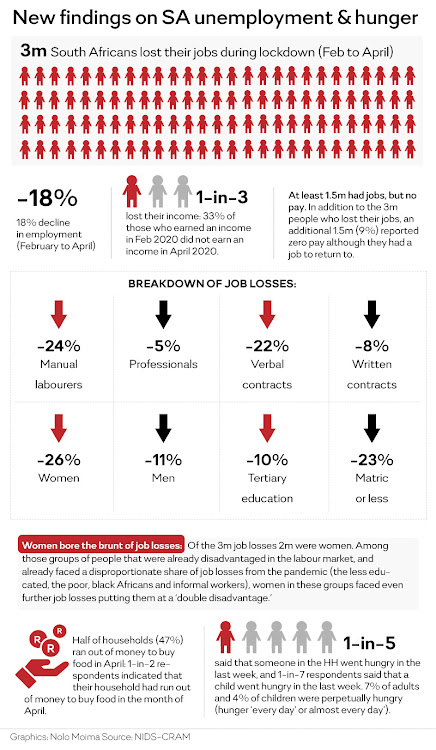 New research has shown the devastating impact of Covid-19 on the economy.
Image: Nolo Moima

The principal investigator of the Nids-Cram study, Prof Nic Spaull, said the survey results and the reports provide policy makers with the best available information about what is happening on the ground.

Spaull said the reports showed broad findings, including that there has been an incredibly large number of job losses between February and April and that pre-existing inequalities have grown.

This means that 3 million fewer people  were employed in April compared with February, an 18% decline.

Prof Vimal Ranchhod of the University of Cape Town, and author of one of the reports, said SA’s labour market had always been characterised by high degrees of unemployment before Covid-19 arrived.

Women, manual workers and those at the bottom half of the income distribution have suffered disproportionately.

He said extracts from the papers that had been published on employment showed job losses were concentrated among the already disadvantaged.

“Women, manual workers and those at the bottom half of the income distribution have suffered disproportionately,” Ranchhod said.

Another co-author of a research report, Prof Daniela Casale of the University of the Witwatersrand, said the survey showed that women were more likely to experience a large degree of job losses compared with men and a bigger decrease in the number of hours worked if they remained employed.

Based on the survey, she said researchers found that net job losses between February and April 2020 were higher for women than for men, with women accounting for two-thirds of the total net job losses.

Among those who remained in employment there was also a bigger fall in average hours worked per week for women than for men.

Prof Murray Leibbrandt, of UCT and part of the steering committee of the Nids-Cram study, said the picture of inequalities was known but what the survey showed was how the 7,000 people who were interviewed were telling the story of how South Africans were experiencing the Covid-19 pandemic.

He said the survey showed that a million out of the 3 million who lost their jobs between February and April had moved into poverty.

One million out of the 3 million who lost their jobs between February and April moved into poverty.

Dr Gabrielle Wils, co-author of another report, said survey results showed that while the response from the government and the social sector to assist those who were struggling had been commendable, large groups of households were experiencing tremendous hardship as a direct consequence of the lockdown.

She said new evidence from the telephonic survey suggested that two of every five adults reported that their household lost its main source of income since lockdown started on March 27.

This had had devastating consequences for food insecurity and household hunger.

In a report she co-wrote with Prof Leila Patel, Prof Servaas van der Berg and Bokang Mpeta, the authors said far too many people, and far too many children, were going hungry.

They said this had occurred despite significant emergency relief. SA’s R500bn fiscal relief package had drawn on channels of social protection available to address the socio-economic fallout of the coronavirus pandemic.

They said there was an urgent need to remedy the Unemployment Insurance Fund’s administrative system to ensure those eligible for payouts received their income protection timeously. For the unemployed, the report suggested that the social relief of distress grants should be extended for three months to January 2021.

Forty-seven percent of adults interviewed reported that their household ran out of money to buy food in April.

Carmen Christian, another co-author, summarised research generated by three papers on health and said only one in three of those surveyed were implementing effective preventative measures such as mask wearing, avoiding large crowds and physical distancing.

She said that when it came to wearing masks, only one in two respondents reported doing so, while research showed eight out of 10 people needed to wear masks to change the trajectory of Covid-19 infection.

She said the survey also showed that the majority were unable to list the three most common Covid-19 symptoms – coughing, fever and tiredness.

She said only 6% could name all three, which was a concern.

Spaull said the team would release a second wave of data after interviewing the respondents in six weeks.