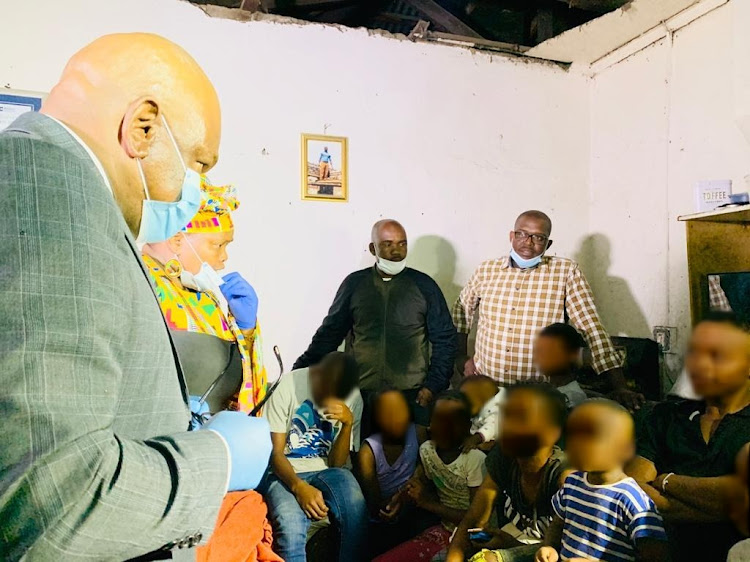 A family of 20 was found living in a two-room structure in Alexandra. TimesLIVE has blurred faces to protect the identity of the children.
Image: Supplied

Johannesburg mayor Geoff Makhubo found 19 children and one adult crammed into a two-room dwelling in the informal settlement while distributing food parcels to hungry residents affected by the coronavirus lockdown in Alexandra.

Makhubo’s spokesperson Mlimandlela Ndamase said the mayor visited the family on Tuesday and found the children in the care of a 34-year-old woman.

“[They live in] a barely furnished home in a highly dense area in between other informal houses ... You have to go through a very narrow passage to get to the house at the back of all the other informal dwellings.

“It is really not a space that is conducive to be raising children or habitable for that number of people, especially young children,” Ndamase told TimesLIVE.

“I am sure it’s a three-by-six metre space that has just been divided into two to create space for people to sleep and a small lounge area where they can sit and eat,” he added.

“We got there at a time when it was raining heavily in Alex. We actually found that the rain seeps through the roof of that house. So it was wet inside the house.”

Ndamase shared a photograph taken during the visit. It showed some of the children gathered about in the makeshift lounge, listening to Makhubo speak.

The 34-year-old woman taking care of them explained that she was originally from the Eastern Cape. The children are hers and those of her two deceased sisters.

Their ages varied. Among them were a baby aged about nine months, toddlers and children aged two to four.

The older children, teenagers, were helping her care for the younger children.

Ndamase said the woman shared her struggle raising her own children, nephews and nieces, adding that the lockdown had made things even tougher.

While she was not fully employed, the lockdown had made it difficult for her to even leave home in search of the odd jobs that previously helped support her and the children.

The family were given food parcels. The department of social development will be deployed to establish which of the children did and did not receive social grants.

“Already there’s a commitment that has been made that there is some work that needs to be done on the house because there is no ventilation. I think there was one window. The mayor has directed that those things be quickly attended to,” Ndamase said.

Makhubo called for a plan to assist the family, even after the lockdown.