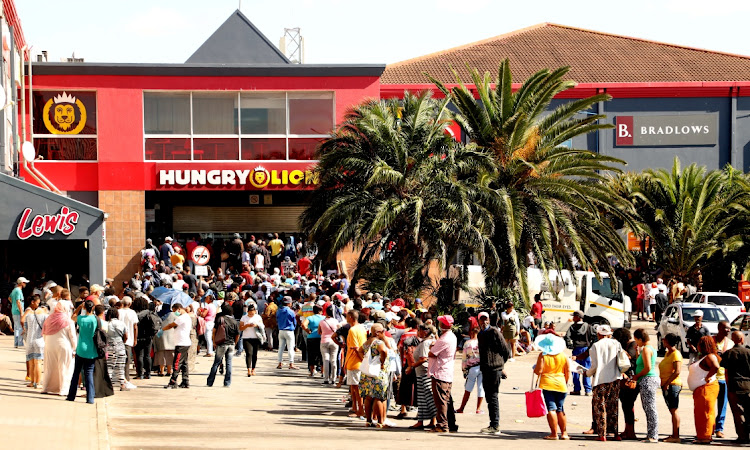 TOO CLOSE FOR SAFETY: People queue outside the Cleary Park shopping centre to get their Sassa grants so they can purchase basic necessities
Image: FREDLIN ADRIAAN

Standing shoulder to shoulder in their thousands, the elderly in Nelson Mandela Bay spent hours queuing for their Sassa grants on Monday — with very little social distancing taking place in some areas.

Tired, scared and angry, many old people said they were afraid to be out among so many people but had little choice because they had no groceries at home.

This, as the number of confirmed Covid-19 cases in Nelson Mandela Bay rose to four.

Eastern Cape premier Oscar Mabuyane admitted that the provincial government was worried by the thousands of people flocking to pay points to receive their social grant money this week.

Mabuyane said it was inevitable that more people would become infected.

At venues around the province, elderly people queued in large numbers, some keeping the recommended one-metre distance apart while others openly ignored it.

Social grants will be paid until Friday, something that concerns Mabuyane.

“That is our fear. What is happening now reverses the lockdown and we cannot not do it because people need the money.

“It is beyond our control but we are here to monitor the measures and see to it that they are adhered to,” he said.

Six days ago, social development minister Lindiwe Zulu said the South African Social Security Agency would be ready with social grant payments from early on Monday —  starting with the elderly — and continuing through the week.

While other grants  — such as child social grants — were to be paid on other days, Zulu said there was no need to panic or rush to pay points because the money would remain available.

Scores of people gathered at the Cleary Park and Motherwell shopping centres, where more than 1,000 people queued at a time.

Wheelchair-bound Maleen Booysen, 61, from Booysen Park, was queuing at the Cleary Park centre.

Though Booysen was happy that the government had allowed the elderly to get their grant money earlier than normal, she said she was afraid to be outside her home.

Fear was not, however, the only problem for the elderly desperately trying to access their money.

They had to contend with transport problems as well.

Though transport minister Fikile Mbalula said on Sunday that he would be relaxing operating hours for taxis and buses to accommodate social grant beneficiaries, the message seemed not to have filtered through.

Gavin Miller, who operates a private taxi service in the area, said because of the restrictions on the number of people he could transport he had to up his fee by R50. 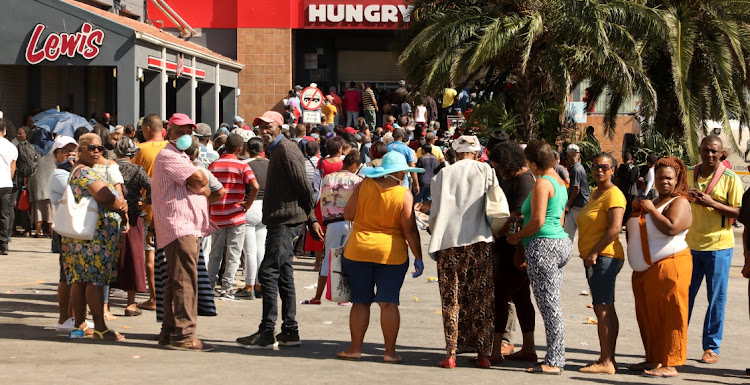 “We had to lower the [fare] back to the normal rates because the people complained,” he said.

“This is a poor community but to be able to pay for petrol we then went back to loading a full car.

“People arrived here as early as 5am — when we fully load our cars with passengers, we’d finish around 8pm, when would we finish if we would take one person at a time?

“The transport time restrictions of [between 5am and]  9am are a problem.”

He said if they stopped running at 9am, there was no way for the elderly to return home.

“People live far away, the people can’t carry their groceries or walk with them back home —  it’s too far.”

WALKING THE LINE: People queue outside the Cleary Park shopping centre to get their Sassa grants
Image: FREDLIN ADRIAAN

Miller said if the drivers were chased away, it  would cause chaos because a gathering of 1,300 or more would be formed by the elderly, with their money and groceries, making them vulnerable to criminals.

Fuziwe Teketa,  67, who is blind in one eye,  said she had arrived at the Motherwell centre at 5am but was still waiting in a queue at 11am.

There was no social distancing at the Motherwell Centre on Monday as more than 1300 people queued to enter the centre.

Among them were the elderly and disabled where some arrived as early as 5am to collect their grant @HeraldPE 📹 by Fredlin Adriaan #CoronaVirusSA pic.twitter.com/22wCcVfsEN

“I told the security guard I couldn’t see [and] he asked me how I got there,” she said.

“They let people [into the centre] who were going to the bank.

“An old man waited so long that he fell and had a seizure.

“I asked the security guard to use the toilets and he told me to go wee between cars, refusing to let me into the mall.

“The elderly are not wanted in Motherwell. I have kidney problems, my lower back is painful,” Teketa said.

The chaos experienced at Cleary Park and Motherwell was, thankfully for those queuing at the Greenacres Shopping Centre, absent.

Lillian Matutu, 78, from Kwazakhele, applauded Greenacres for providing each person waiting to get their grant with a sanitised trolley — to remind them to keep to the social distancing rule.

She said though she was scared, the buffer the trolley created had helped make her feel a little safer.

The centre has devised a formula for social distancing by using sanitized trollies to distance shoppers.#Covid_19 #Covid_19SA

Sassa provincial spokesperson Luko Qina said officials had been disappointed to learn that people had been queuing for child social grants when Monday had been set aside for the elderly.

“Understandably, the young could come to assist the elderly, while caregivers could come to get a disability grant for a child under 18, which is called a care dependency grant,” Qina said.

“We made sure that we communicated the basic measures that should be undertaken.

“In the Eastern Cape, we pay 2.8-million beneficiaries.

“We relied on our officials, soldiers, police and retail stores to help with social distancing.”

No Sassa officials, police or army personnel were seen for the most part of the morning at the Sassa pay points visited by a Herald team.

However, soldiers were seen at Cleary Park later in the day.

“A number of areas in the province were impressive today,” Qina said.

“The retailers managed huge numbers, some were chaotic outside but managed inside.” 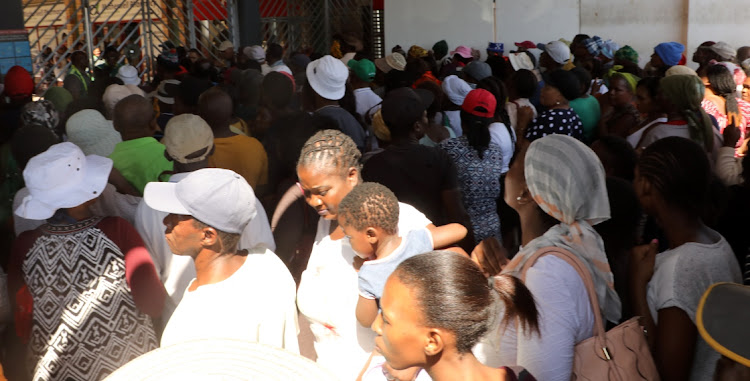 Qina urged retailers not to  pay out any money to people who came to collect child social grants because their dedicated day was April 1.

He assured the elderly that they did not need to fear losing their grants because the new system allowed them to be kept for a maximum of three months, after which the grants would be cancelled. — Additional reporting Daily Dispatch