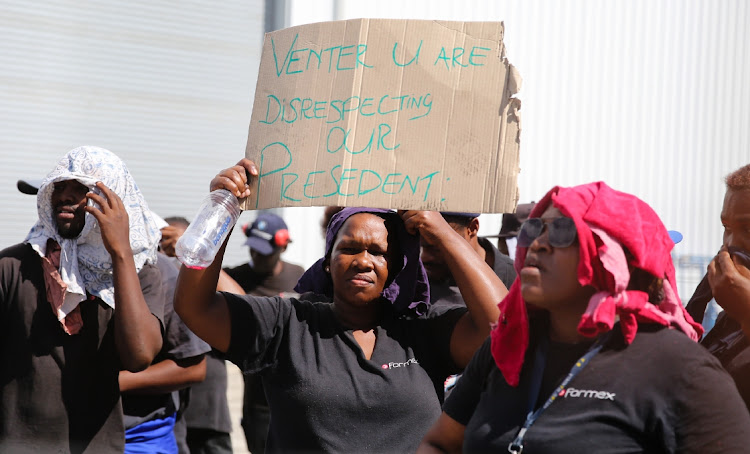 Employees of Formex Industries in Markman Township protest over a pay cut due to the national shutdown
Image: WERNER HILLS

Panicked employees from across Nelson Mandela Bay have been flocking to The Herald offices — afraid they will not be able to sustain themselves after being forced to take unpaid leave during the shutdown.

Workers at Goodyear Tyre SA and Formex Industries protested outside their offices on Thursday and Wednesday respectively.

Dozens of workers from nine other companies have also voiced concerns.

A worker who did not want to be named said Goodyear employees had been told they would not be paid for the duration of the lockdown.

“By doing this, they are undermining what the government has said in that companies must pay their workers and claim back from the unemployment insurance fund,” the worker said.

Another Goodyear worker said it seemed as if the company did not care about its staff.

“Some of us are coming from the night shift and we’re going to leave here not knowing what’s happening.

“We are frustrated because our wives are asking us what’s going to happen and honestly we don’t know,” the person said.

A third Goodyear employee said management had promised to respond to their queries by 2pm on Wednesday but, until 9am yesterday. nothing had been communicated with them.

The three-week lockdown which took effect at midnight yesterday means businesses that are not deemed essential are closed.

The containment measures are expected to have a crippling effect on an economy already hamstrung by slow growth and an unreliable power supply.

For large businesses, Ramaphosa said the government was looking at relief measures for those registered with the Unemployment Insurance Fund.

A letter given to staff a short while after the protest, which appears to have been written the day before by Goodyear group MD Darren Hayes, said to enable the long-term health of the company the following measures would be implemented.

Asked if workers would be paid during the lockdown period, Goodyear spokesperson Nonkosi Dyantyi said as a consequence of the statement by Ramaphosa, the requirement to temporarily shut down was imposed on Goodyear SA.

“The safety, health and wellbeing of our associates and business partners remains our highest consideration and as such we will always adhere to the government’s guidelines of curbing the spread of the Covid-19 virus.

“We are implementing measures to minimise the economic impact on our associates during this period,” Dyantyi said.

She did not respond to the question of pay.

Meanwhile, on Tuesday and Wednesday, Formex Industries’ workers said they earned per week and budgeted accordingly.

Employee Andiswa Maka said she was afraid of falling behind on her payments.

“This is giving us grief because three weeks is a long time and our children are at home now. That means demand for more food so we are worried.”

“We were told that this Thursday we will be receiving our last payments until we resume work next month.

“The only reason we got was that the company does not have money and if there was no production output there would be no money,” Maka said.

She said they were unsure whether they qualified for the special dispensation for companies that are in distress during this period.

CEO Hennie Venter said the national shutdown was foreign terrain for both employer and employee but the company and the employees’ union, Numsa,  had come to an agreement.

He said the company would give employees one week of pay.

“Everything happened so quickly. The president made the announcement but for the most part it was very unclear and I am sure many other companies were faced with the same uncertainty that we were, and both employee and employer did not understand each other, but after discussions and consultations with Numsa’s regional representative he explained everything and all the necessary documents and I can say there are no issues,” Venter said.

In a statement released earlier this week, the National Employers’ Association of SA CEO Gerhard Papenfuss stipulated measures for companies to use during this period.

Papenfuss said employers able to continue paying their employees during the lockdown period, without compromising the viability of the business, should.

“Employers may place their employees on annual leave and exchange this with the shutdown in December, if possible and feasible.

“Payment of leave entitlement should occur at the same intervals as normal remuneration payments, that is weekly or monthly.

“Employers may consider staggering payments of monies due in order to manage cash flow effectively.

“Employers may implement a layoff for their employees which entails that employees will not be paid as the company has to observe the lockdown,” Papenfuss said.

“Workers should not suffer during this time,” Twani said.