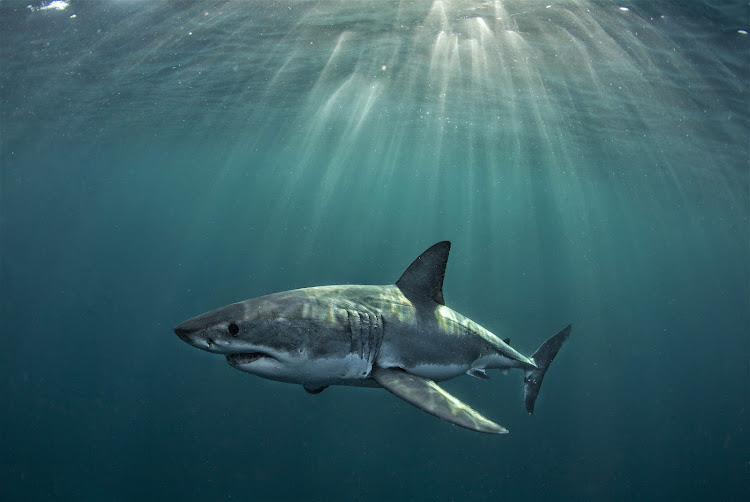 GETTING A CLOSER VIEW: According to a Stellenbosch University study by Dr Sara Andreotti, there are fewer than 500 adult white sharks left in South African waters. Now a new venture has been launched in Algoa Bay to showcase the species and spark new research
Image: CHRIS FALLOWS

The songs of the legendary White Zulu will play through underwater loudspeakers while tourists lower themselves into the depths for a close-up encounter with the legend of the ocean, Raggy Charters owner Lloyd Edwards said at a launch event on Monday night.

“I discovered this musical approach during a recent visit to see the white shark cage diving industry in Australia and New Zealand,” he said.

“There is one operator in Australia who uses AC/DC to attract the sharks. We will be doing the same except we will be using Johnny Clegg.”

The musical lure is just one of the fascinating aspects of the venture which could bolster tourism, enhance research into the mighty but little understood marine apex predator and prompt a crackdown on the long line shark fishing industry which presently operates without a bag limit.

Edwards and his team received word nearly two years ago that their application for an Algoa Bay white shark cage diving permit had been approved by the department of environmental affairs.

The right had to be turned into a permit however and in the interim some concern was raised locally that chumming — using fish parts and blood as bait to lure the sharks — might endanger people swimming at beaches in the Bay.

“Chum does not lure sharks to an area. It simply lures them a few metres closer to a vessel.

“However, I asked the critics back then, if I found an alternative way to lure sharks closer without chum, would they be satisfied.

“They said they would. So that’s what I set out to do.”

The AC/DC operation in the Neptune Islands area off Port Lincoln, South Australia, was situated in the same area as two operations that used chum but the sharks were clearly curious about the sound of the music and went out of their way to investigate it, offering tourists prime viewing opportunities.

Edwards said he had already been in talks with the Institute for Coastal and  Marine Research at NMU and they had indicated that they would be interested in studying the music shark attraction phenomenon.

“We’re not sure which tracks our sharks will enjoy the most but we’ll try a few. We could be looking at a Raggy Charters White Shark Cage Diving Top Ten,” he joked.

#Covid19 | All you need to know about coronavirus

He said the new venture would hopefully shine a light on the huge value offered by a living white shark and the threat that the species faced through the demersal long line shark fishing industry which includes six licensed operators, two of them based in Port Elizabeth.

Companies licensed in terms of this sector target a wide range of small sharks especially smooth hound sharks, selling the flesh to “flake and chip” shops in Australia — where shark fishing is banned — and the fins to Hong Kong.

The industry deploys lines up to 150km long and baited with up to 3,000 hooks, he said.

“These smaller sharks make up the bulk of what the white shark eats, but this wall of death is wiping them out.

“The result is white sharks are dying or moving away which is bad news environmentally and economically.

“Fewer of them means less predation on seals and consequently more pressure by seals on our sardines — which are needed for our famous sardine runs, which marine tourism relies on.”

“Also in terms of tourism, the disappearance of white sharks in the southern and Western Cape has led to the collapse of the multimillion-rand white shark cage diving industry there.

“Something has to be done and we’ve written to environment minister Barbara Creecy about our concerns.”

Edwards said the aim was to keep the operation simple and non-invasive.

“The tourist will be equipped with a mask and nothing else.

“As a shark approaches, he or she will be able to step down into the cage and see it gliding past right there next to him.”

Tourists keen to experience the new Algoa Bay adventure in the northeastern would be offered a three-day window to allow for the best possible conditions.

“This means more days that they will be here to enjoy our hospitality and the many other experiences we have to offer.

“But the white shark is the hook and we need to protect this vital asset.”

The operating permit issued by the department of environmental affairs grants Raggy Charters and its vessel My China permission to run the white shark cage diving venture for a decade.

According to the permit, the operation will run off Bird Island, which is situated in the northeastern corner of Algoa Bay, within SANParks’ fledgling Addo marine protected area.