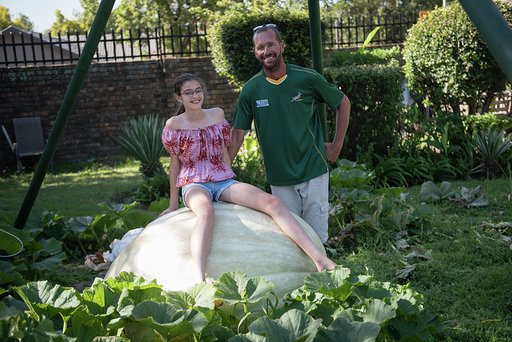 Peet Joubert has won the Transvaalse Landbou-Unie’s annual Goliat van Gat Pumpkin Festival for the second year in a row.

He took the first prize of R15‚000 with Howie‚ a 420kg behemoth‚ on Saturday at the Pretoria Farmers Market.

Her squash was so big that they removed it from the children’s competition and placed it with the adult  entries.

Megan had been watching her father’s method of growing and wanted to try it herself.

And she said she did it on her own without help from her dad.

Tupin came from the seed of  the SA biggest pumpkin record holder, Bekkie‚ which was grown by her father.

Megan said her friends would be very excited when they heard  of her win.

Festival organiser Henri Combrink said he was disappointed in the number of entries this year, but the November rains had made it extremely hard for growers, and many crops had died.

The union owns the rights to the entrants’ seeds and sells the winning seeds for R250 for two.

The union donates all entered pumpkins to welfare organisations to feed the needy.

Joubert is now pinning his hopes on next week’s Walkerville Agricultural Show, where he will enter Wallie‚ which he believes may weigh 450kg.

But this year there would be no record breakers for him because of the heavy rains.

He said many farmers had lost their produce from root rot as a result.

“I am so proud of my daughter‚ she did so well‚” he said.

It was recorded at the Great Pumpkin Commonwealth in Ludwigsburg‚ Germany‚ on October 9 2016. — TimesLIVE