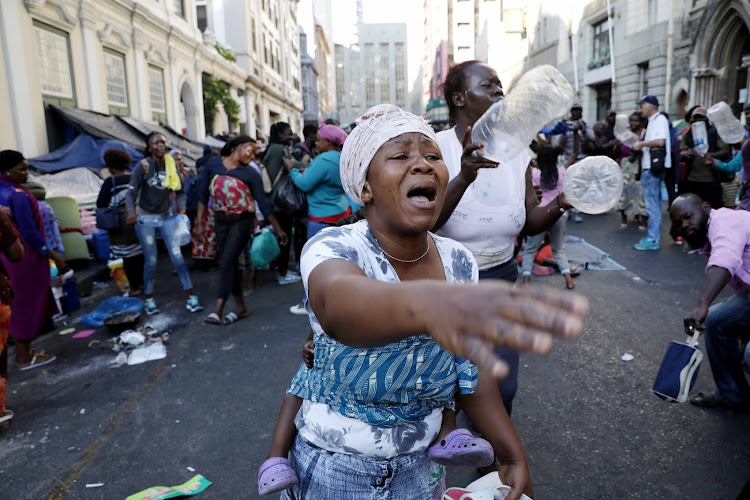 The clashes between refugees and authorities in Cape Town are continuing as the city clamps down on those living outside the Central Methodist Mission in Greenmarket Square.

One refugee told TimesLIVE that others had perpetuated misinformation about being victims of xenophobia. He accused them of being chancers, saying xenophobia was not an issue in the city.

Here are five must-read stories on the situation:

Police dismantled hundreds of illegal structures occupied by the refugees in the city centre on Sunday. Emotions ran high as homeless occupants pleaded with authorities not to stop them illegally camping outside the church.

On Wednesday, a refugee told TimesLIVE that others had lied about being victims of xenophobia to pressure the United Nations High Commissioner for Refugees (UNHCR) into moving them to another country.

“I don't think there is xenophobia here. There are normal criminals. Even here in town, there are people trying to make trouble. That is not xenophobia, that is just crime,” said the man.

Scuffle between refugees and police

A scuffle broke out between police officers and refugees on Monday after they were evicted from the city centre and spent the night at a park outside the city. A police officer sustained an injury to her arm and a refugee was arrested.

JP Smith, the city's mayoral committee member for safety and security, said the refugees were asked to return to the communities they were from before staging a protest and occupation of St George's Mall.

Bongani Bongo, chairperson of the portfolio committee on home affairs, on Tuesday urged refugees to obey the city's bylaws to prevent clashes.

Bongo issued a statement in response to the removal of the illegal occupants, as instructed by a court order.

He said the refugees were disregarding the law to put pressure on the UNHCR to intervene in their cause, despite it saying that it was unable to move them to another country.

The Kiffness to perform at Greenmarket Square, despite criticism

The Kiffness's David Scott said on Thursday morning that the band would continue with a scheduled performance at Greenmarket Square, despite the refugees' removal.

This followed calls from some who asked the band not to perform in solidarity with the refugees. Scott said the concert did not affect the refugees and encouraged Capetonians to enjoy the city's streets.