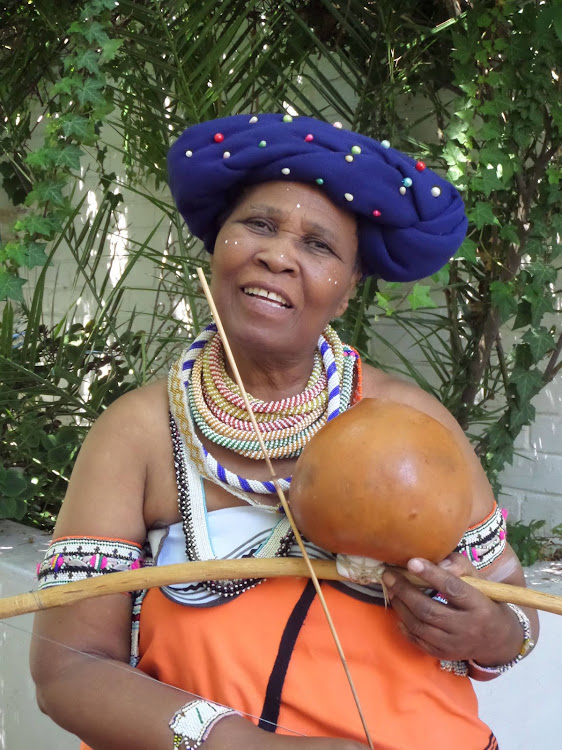 The festival’s  artistic director Rucera Seethal has described Madosini as “our national treasure”.

“She has kept alive the tradition of Xhosa music rooted in oral tradition, in particular the distinctive sound of the uhadi (music bow), umrhumbe (mouth bow) and isitolotolo (Jew’s harp),” Seethal said.

“A musician, composer and story-teller, she also makes instruments, has performed and collaborated widely and continues to teach the body of knowledge she has carried over her lifetime.

“We are proud to feature her sonic and cultural legacy at this year’s festival.”

Madosini was born in 1943 in the Eastern Cape, and often jokes during her performances that she grew up without formal schooling.

She has performed internationally for many years including at Womad festivals where she was also documented in their Musical Elders Project.

Over the years she has performed with renowned artists Ringo, Thandiswa Maswai, Derek Grepper, Hilton Schilder, Gilberto Gil and many more.

“Being told that I’m coming to the festival has made me happy, like a calf feeding from its mother,” she said.

“If I had my way, I would wake up tomorrow and go to eRhini [Makhanda].

“I can’t wait to teach you umrhube and about the  lived experiences of our cultural practices that you don’t practise any more.

“During my youth we did not use sour milk for umphokoqo (African salad) we used amavilo.

“You probably don’t know what they are. I will tell you about it when I see you in eRhini.”

As the 2020 featured artist, Madosini will perform in two collaborative performances, one featuring her performing with members of her traditional ensemble from Libode, and a second as a kind of thanksgiving to her supporters, which will include her friend Pedro playing the traditional ixilongo flute and variixilongoial guest musicians.

She will also present a musical storytelling performance for children and several bow-playing workshops to arts educators and musicians.

The National Arts Festival’s executive producer Nobesuthu Rayi said: “We are grateful that we will be given the opportunity to honour Mama Madosini on her own soil and feel sure the people of the Eastern Cape and SA will join us in celebrating this extraordinary woman.”