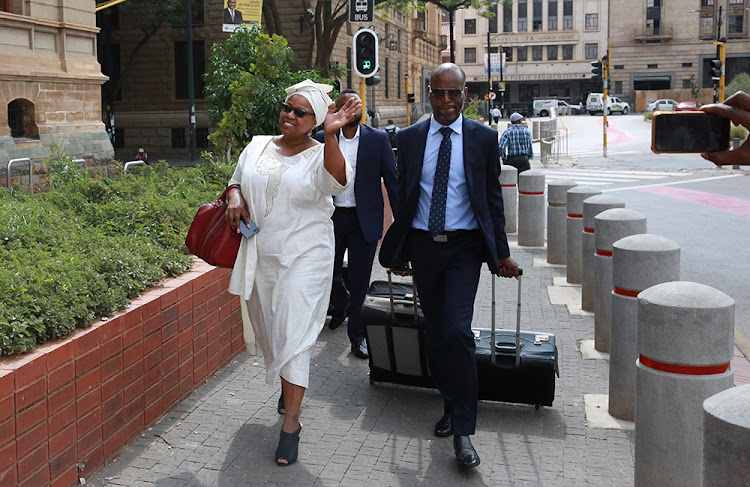 Dudu Myeni at the high court in Pretoria on February 20 2020. She told the court she did not attend court proceedings last year because her financial means were limited.
Image: Thapelo Morebudi/Sunday Times

Proceedings in the delinquency trial of former SAA board chair, Dudu Myeni, on Friday kicked off with her explaining to the court that she didn't have the financial means to attend court proceedings last year when the trial was supposed to start.

She was taken to the high court in Pretoria by civil rights group Organisation Undoing Tax Abuse (Outa) for alleged misconduct during her time running the airline.

Myeni was responding to questions from the Outa legal representative, Carol Steinberg, who put it to her that she didn't respect the court by missing the court appearance. In response, Myeni said she was unemployed and didn't have funds to travel from KwaZulu-Natal to Pretoria to attend the trial.

"It is a fact.  I'm not employed. I have limited living means," Myeni told the court.

Steinberg maintained Myeni could afford to attend the court proceedings because she earned more than R7m in 2017 for serving on two boards, and put it to her that she didn't attend court last year because she didn't want to.

Myeni, however, maintained she was unemployed and said she only received a stipend for serving as a non-executive director.

Steinberg stopped her cross-examination abruptly to address Myeni on another aspect.

Myeni didn't deny consulting with her lawyer. She said her battery had  died so she would no longer be able to use her phone.

Dudu Myeni was taken to court by civil rights group Organisation Undoing Tax Abuse (Outa) for alleged misconduct during her time at SAA. She appeared at the Palace of Justice in Pretoria on February 20 2020. The aim of the case is to have Myeni declared a delinquent director in terms of the Companies Act.

Myeni:With respect,Mhlathuze water has got nothing to do with SAA.

Steingberg: It has everything to do with your affordability to come to court. @Newzroom405

The purpose of the case is to have Myeni declared a delinquent director in terms of the Companies Act. If declared such, it would mean she could never again secure work as a director in any entity.

Key among the allegations were claims that she was responsible for the failure of a R1.5bn profit guarantee for SAA if it went ahead with a deal with Emirates airline in June 2015. Myeni told the court she failed to understand why she was being targeted for a collective decision made by the board at the time.