‘Any day can be your last’: cash-in-transit guard, as heists surge in SA

A G4S van was blown apart during a cash heist in Mondeor, south of Johannesburg, on Wednesday.
Image: Yusuf Abramjee

It’s a thankless job with minimum pay and a high risk of never making it home again.

“Every time you leave the house, there might be a chance that you never return again,” a cash-in-transit guard, who asked to remain anonymous, told TimesLIVE on Friday.

The guard, who works as a third man for one of SA’s cash delivery security companies, said he feared for his life after the recent surge in heists.

“It’s very dangerous, every day at work I look over my shoulders, left and right. We are not safe any more,” the guard said.

There has been at least one heist a day nationally, so far this year, with three reported in Gauteng alone this week.

The latest incident was reported in Spruitview on the East Rand on Thursday, when the N3 highway was brought to a standstill.

The driver of a cash van was shot in the head when a VW Golf 7 and a white BMW forced their vehicle off the road. Security guards were ordered out at gunpoint and robbed of three firearms.

The driver's crew members escaped unharmed. No money was taken and no arrests were made.

Two other incidents were reported earlier in the week, in Kempton Park, the East Rand, and in Mondeor, south of Johannesburg. 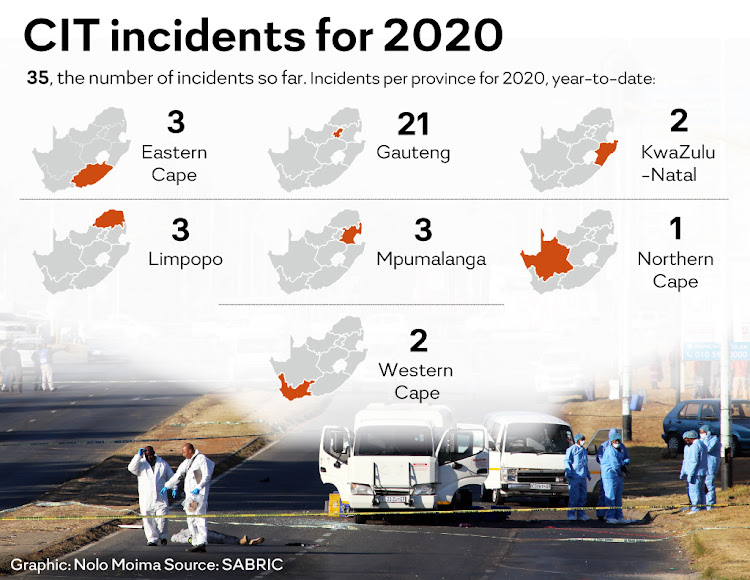 According to the SA Banking Risk Information Centre there has been a total of 35 cash-in-transit incidents recorded nationally this year.
Image: Nolo Moima

According to SA Banking Risk Information Centre (Sabric) CEO Susan Potgieter, since the start of 2020, there had been a total of 35 cash-in-transit incidents recorded in SA.

Gauteng has recorded 21 incidents, followed by Eastern Cape, Mpumalanga and Limpopo with three incidents each.

The Western Cape and KwaZulu-Natal each had two incidents while only one incident was recorded in the Northern Cape.

The guard said: “My family said I must leave this job, but I can’t leave the job until I find a different one. With the salary that I get I support my family, but it is not enough.”

Gareth Wilson from the Institute for Security Studies (ISS) said police worked closely with Sabric and the cash-in-transit industry and has task teams to try to curb the heists, but it was not enough.

“You are not going to absolutely stamp this out just through task teams, you need people across the country to trust the police to give you information to report on activities and right now there are very low levels of trust in the police,” said Wilson.

Wilson said police only categorise an incident as a heist once a cash van is intercepted and money taken from it.

“There is no doubt that these criminals are continuing to run amok with heavy fire power. They do not hesitate to shoot, or even kill and explosives are used in almost every one of the attacks we have seen this year alone,” Abramjee said.

“We need urgent interventions not only from the cash-in-transit companies, by police and members of the public who can blow the whistle on these criminals.”

Abramjee said in most attacks hijacked or stolen luxury vehicles with cloned number plates were used.

“My call is for the community to blow the whistle on those involved in these gangs, because they come from our communities. They need to be brought to book.”