By Zizonke May - 07 February 2020
GONE WITH THE WIND: Georgina Kesa, 71, surveys her damaged kitchen after her roof was blown away by gale-force winds during a storm in Enon, just outside of Kirkwood, on Tuesday night
Image: EUGENE COETZEE

That’s how long it took for a “whirlwind storm” to destroy homes, uproot trees and terrify the community of Enon, a village just 13km east of Kirkwood.

Five houses in one road were devastated by the storm that struck on Tuesday night, leaving families shattered after their corrugated iron roofs and temporary structures were blown away.

Many structures  made of mud were reduced to heaps of soil, leaving more than a dozen families homeless.

In total, 29 formal homes and 23 informal houses in the area were severely damaged by the storm, Sarah Baartmen municipal manager Sidney Fadi said.

Homeowners said the stormed started with heavy rain, but conditions became dangerous when a gale-force wind hit the area

Zoleka Matomela, 59, said she had been watching television with her daughter when the storm started at about 7pm.

“My daughter and I were just talking about the heavy rain in Alice last week.

“As I looked out the window I noticed the big tree in my yard moving vigorously — and I found that to be strange,” she said.

Matomela said the area had been experiencing hot weather for weeks and when it grew cooler in the evening residents were happy.

“We have been praying for rain for a while now, but we never expected this,” she said, pointing to her devastated house.

“I asked Neliseka [her daughter] to close the back door and suddenly we heard a strong gale-force [wind] and piercing thunder.

“At that time we had not yet noticed that our roof was gone — it was only when it started raining that we realised we were outside,” Matomela said.

She said she was able to save only her television set with the help of her tenant who rents a house on  her property.

“There’s only two of us here and my two-year-old grandchild,” Matomela said, adding that when the storm struck she huddled over the two-year-old child to protect him.

“Everything got wet, the fridge, the microwave — don’t get me started on my [satellite] dish, it is hanging [on] for dear life.”

Matomela’s home is a temporary corrugated iron structure with mud walls in the interior. 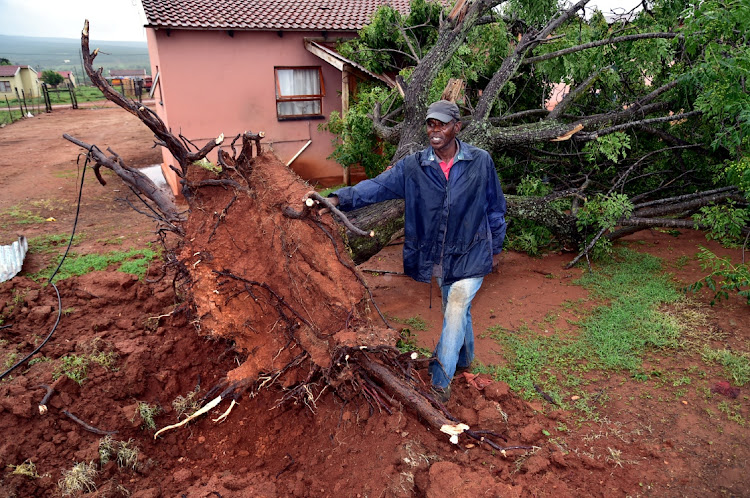 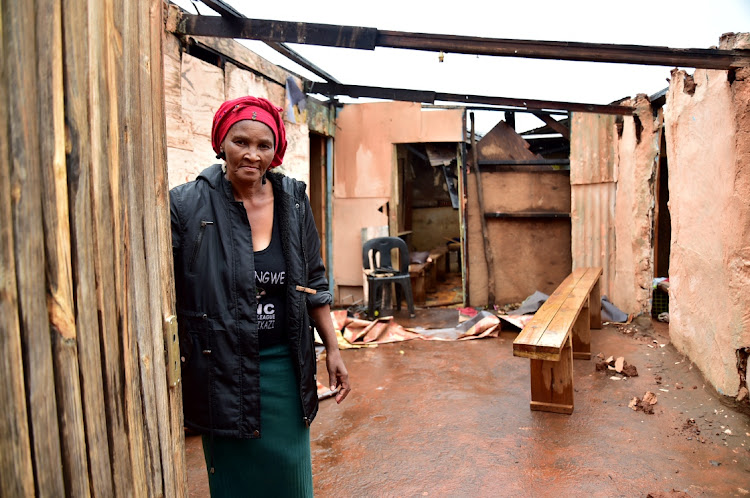 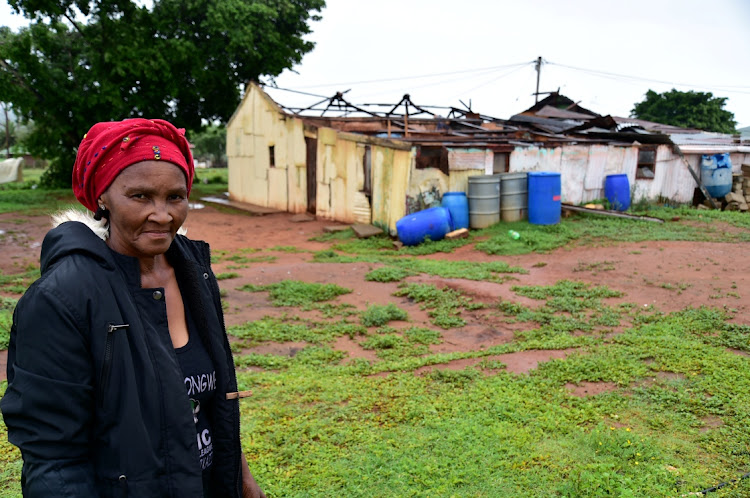 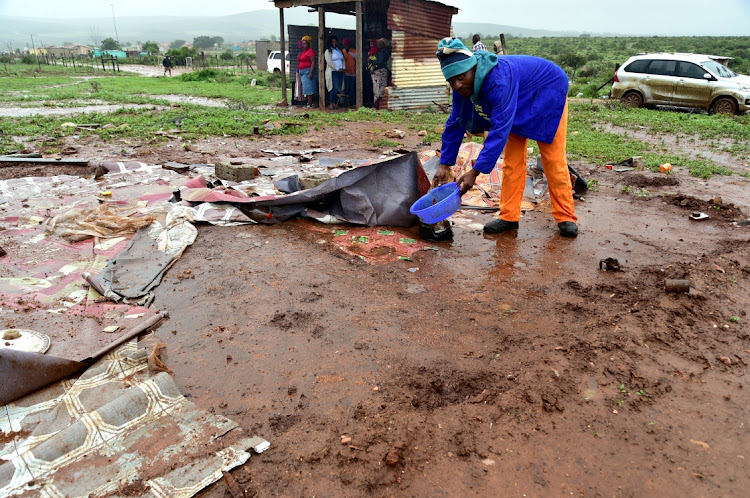 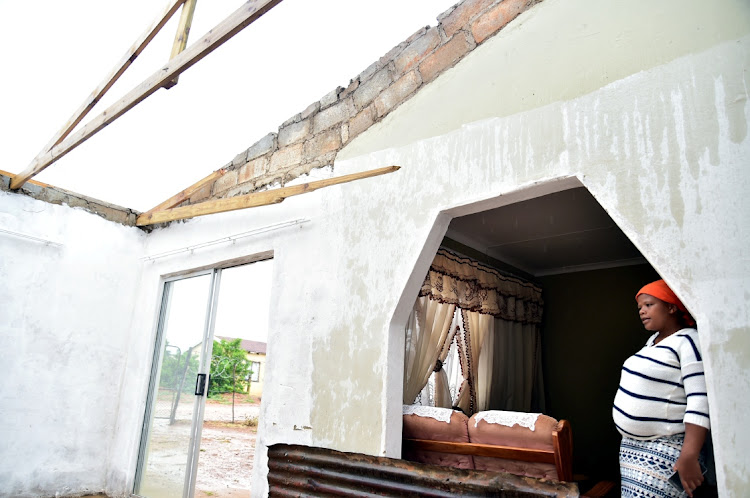 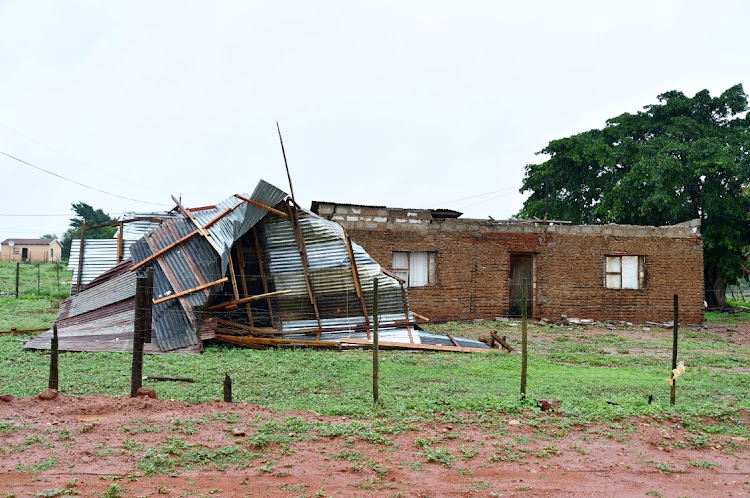 Sharing her traumatic experience, 78-year-old Georgina Kesa said she watched the corrugated iron sheets of her roof being blown away.

“We were also in a panic because we did not know how we were going to carry my 82-year-old husband, who is in a wheelchair,” she said.

Kesa said her two sons, who live in separate houses on the property along with her daughter, were quick to respond and helped carry their father into one of the other houses.

The storm destroyed the roof of her home, exposing the kitchen area and pantry.

A tree at least 5m from the house was uprooted and fell a few centimetres away from her eldest son’s house.

“It all happened so fast, the storm did not last anything longer than 30 minutes.

“It hailed, it rained and there was a strong whirlwind, something we have never seen before.

“Although the damage is severe, we are happy that no-one got hurt,” he said.

Siyabulela Mboniswa, 36, said he lost everything in the storm, with his wet clothes his only remaining possession.

“I’m barely surviving, I work odd jobs here and there and when it rains like these past few days I am forced to sit at home,” Mboniswa said.

All that remained of his home were pieces of vinyl flooring lying scattered in the mud.

Community members came together to help those left destitute, taking families into their homes, while other families were given shelter at the local community hall.

On Thursday morning, when The Herald visited  Enon, residents were huddling around a small fire to keep warm, with little wood left to keep the fire burning.

Some families were trying to salvage what was left of the metal sheets to erect walls to keep the rain out.

Fadi said according to a report he received from the local ward councillor yesterday afternoon, no immediate intervention was needed.

“The majority of the damaged homes were of such a nature that they could survive and redo their homes.

“Yes, there were houses where all their belongings were [destroyed] by the rains but I did not receive a report saying that we needed to relocate people,” he said.

Asked about the homeowners whose shack were blown away, Fadi said he would request the ward councillor to intervene.

“We have a responsibility as a municipality to ensure they are taken care of,” he said adding that food and shelter would be made available for residents who needed it.

How safe is your Nissan? Crash test reveals all
Red Location Museum thrown a lifeline