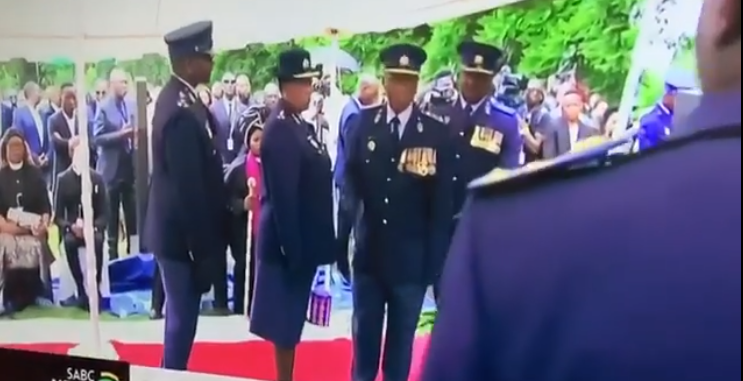 A moemish at the funeral of Richard Maponya had fans giggling.
Image: SABC News

Police have apologised for a drill parade that went embarrassingly wrong at the funeral of businessman Dr Richard Maponya on Tuesday.

The blunder‚ captured on television and broadcast widely on social media‚ saw officers seemingly not knowing their left from their right when given an order at the funeral, which was held at the University of Johannesburg in front of dignitaries who had gathered to pay their respects.

Can’t even get this right with all those medals🤦‍♀️🤣 Embarrassing at MR Maponya’s funeral pic.twitter.com/3PUlSr9CvI

The video elicited outrage from many quarters on social media.

“How do they even catch criminals if they cannot collaborate a simple march off the scene of the comrade’s funeral‚” Muhlezi Ntombela said on Twitter.

“It’s rather unfortunate that this had happened.

“This team had practised the drill, it was just simply an error which is highly regrettable‚” he said.