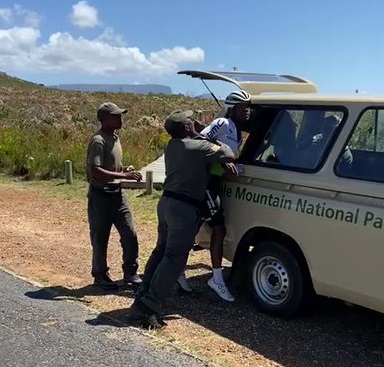 A screenshot where Nic Dlamini was allegedly assaulted by rangers at the Table Mountain National Park.
Image: Twitter/Lawrence Lindeque

Since news broke on Thursday that top SA cyclist Nic Dlamini had suffered a broken arm during a confrontation with SANPark rangers in the Silvermine section of the Table Mountain National Park, several people have come came forward to share their negative experiences with the park's rangers.

Another cyclist, Matthew Beers took to Twitter to say he had had a run-in with rangers in the same area before.

Another person said they had had a similar experience.

“I was also abused by SANParks rangers when I stopped on Silvermine Road one day.  They were hectic to me, accused me of stealing plants when I was picking up glass,”  said the  person.

But SANParks on Friday urged the public to stop hurling insults at the rangers, saying they would investigate the incident.

Spokesperson Reynold Thakuli said they would take statements from Dlamini, the rangers who were involved as well as the other witnesses who were on scene.

“We are also calling on all those who may have witnessed the incident to come forward and also make a statement. We also appeal to all to please stop speculating but rather respect the process. They should stop all the insults they are throwing at the rangers. This will not assist the process,” Thakuli said.

According to Thakuli, Dlamini suffered a broken arm when he resisted arrest from the rangers who believed that he had entered the park illegally. Dlamini was believed to have not paid the entry fee.

“The rangers were alerted of the situation, found him and requested the entry ticket which he could not produce. It seems he was aggressive to the rangers and he resisted arrest. Unfortunately, he broke his arm as the scuffle ensued,” Thakuli told TimesLIVE.

The rangers took him to hospital when they learnt of his injury.

“On his arrival, his colleagues or friends, were aggressive to the rangers. They wanted to take the keys to the SANParks bakkie,” Thakuli said.