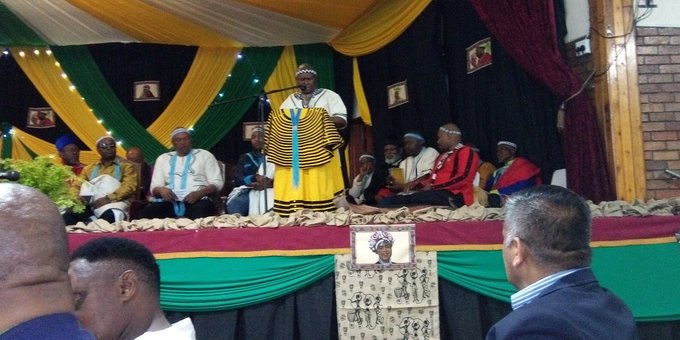 This is what Nelson Mandela Bay mayor Mongameli Bobani told a roomful of congregants and guests at the Bantu Church of Christ in New Brighton on Wednesday.

He was speaking at the memorial service of the late amaXhosa King Mpendulo Calvin Zwelonke Sigcawu.

At the service, Bobani said the previous local government led by the DA, COPE and ACDP were against black people.

Here’s a roundup of some of the claims made by Bobani at the service.

BOBANI: “There are white people who stole water meant for the black people. We are investigating that and we have questioned the previous DA-led administration that they were given R350m, but now we have a drought.”

THE FACTS: In May 2017, then minister of water, Nomvula Mokonyane, said her department would fund the third phase of the Nooitgedacht water scheme expansion to the tune of R318m. Amatola Water manages the project.

BOBANI: “Under the current administration led by me, the National Treasury has pumped R200m more to the metro for good performance and that money would be used to develop black people — we will divide the money and serve the people.”

THE FACTS: While the Treasury gave the municipality R200m, this cash boost came about due to the city’s good spending performance of its urban settlements development grant in the 2017/18 financial year, before Bobani's tenure.

BOBANI: “There is a project worth R300bn to build a town between Despatch and Uitenhage. It has been passed in council and it will be led by a black person. The project will benefit many black people.”

THE FACTS: The municipality only pledged R100m for bulk infrastructure for a development called Florida Heights between the two towns. The development was valued at R10bn — not R300bn — during a sod-turning ceremony in December 2018. The project was also not included in the city’s 2019/2020 budget. It is unclear if it will be included in the next budget.

BOBANI: “The police have not released a report stating that it is the SMMEs killing each other. So far we have provided business opportunities to the black-owned business.”

THE FACTS: The police have stated numerous times they were investigating whether the suspected hits were linked to SMME infighting stemming from a controversial R21m drains project authorised by the council in December 2018.

Bobani also claimed that the DA-led coalition had been against black people and his leadership was in the process of rectifying this imbalance.

“We want accountability in all expenditure by the municipality,” he said.

DA caucus leader Athol Trollip said: “Bobani is clearly a clown who thinks one can simply say things and that makes them true.

“All one has to do is look at the scoreboard and make a comparison between our administration and his coalition of corruption, and it speaks for itself."

Several attempts to reach Bobani to clarify his statements were unsuccessful.

At the memorial service he said that his administration had done a lot for the city, especially those in black communities.

“I plead with the traditional leaders to ask Premier Oscar Mabuyane to allow the municipality to govern,” he said, referring to Bhisho's planned intervention.