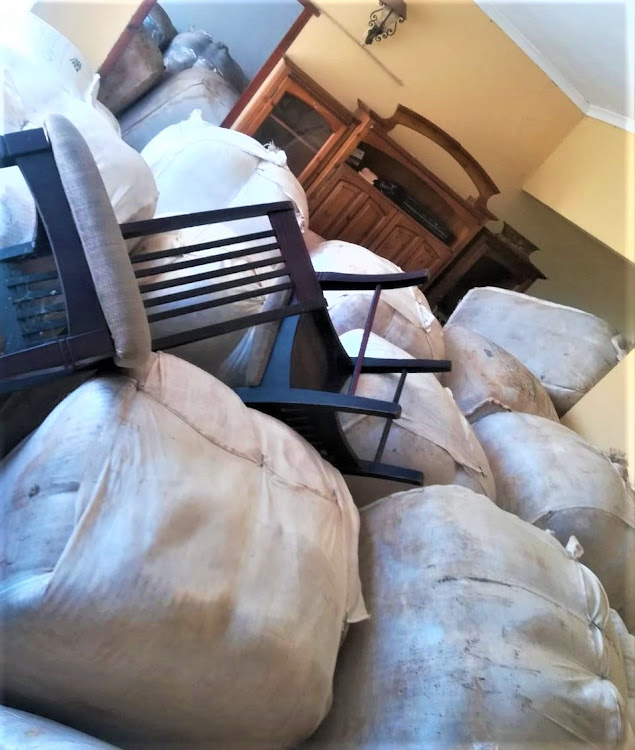 Fifty-five stolen bales of mohair, valued at R3.5m, were recovered at an abandoned farmhouse in Rocklands outside the Bay on Saturday.
Image: Supplied

Fifty-five stolen bales of mohair valued at R3.5m were recovered at an abandoned farmhouse in Rocklands on Saturday.

The find comes after mohair totalling almost R6m was stolen in two separate hijackings since September.

The hijacking sparked fears that mohair delivery vehicles were being targeted by syndicates.

The bust took place after police received a tip-off that stolen mohair was being stored at a  farm in the Bay.

The latest hijacking tool place on October 16 when a truck, transporting 55 bales of mohair from Komani to the Bay, was hijacked.

The driver was forced to stop at the Uitenhage Road and Algoa Road intersection when a white VW Polo pulled in front of the truck.

Hours later the truck was recovered — abandoned and missing its cargo — in Zono Street, Zwide.

Police have confirmed that the weekend's recovery was linked to the hijacking earlier this month.

On September 19, a mohair consignment valued at about R2.4m was hijacked on the R75 between Uitenhage and Despatch.

Amid suspicions that the hijackings could have been organised by a syndicate officials from the Provincial Organised Crime Unit — who deal  specifically with hijackings — took over the case.

SA exports about 2.2mkg of mohair each year. Its mohair industry is worth R1.5bn.

Police spokesperson Brigadier Tembinkosi Kinana said the bags had been found inside a house on an abandoned farm in Rocklands on the outskirts of the Bay.

The discovery was made at about midday on Saturday when police raided the abandoned farm house.

“The 55 bales of mohair were recovered and handed back over to BKB. No-one was arrested at the property,” he said.

The mohair was later confirmed to be from the consignment that was hijacked two weeks ago.

Mohair SA spokesperson, Riaan Marais, said they were relieved to hear the missing bales were recovered, and commended police for their swift action.

“It is still unclear how many of the bales that were recovered contained mohair. According to our information some of these bales contained wool and once we have been informed of the exact contents, we will be in a better position to give a more accurate value of the recovered goods. However, regardless of whether it was mohair or wool, it is evident that these natural fibres are being targeted.”

Marais said theft of mohair had been on the increase, with the biggest problem being product stolen from sheds on farms.

In a bid to curb  black market sales Marais said buyers and brokers were committed to only buying mohair that could be traced back to the source.

“This was not an isolated incident, and the possibility of a syndicate supplying the black market still needs to be investigated thoroughly,” he said.

Police are appealing to anyone with information on the hijacking on September 19 to contact Detective Warrant Officer John Lourens on 071-352-4706.