Flashback: What Mmusi Maimane said when he was elected in PE 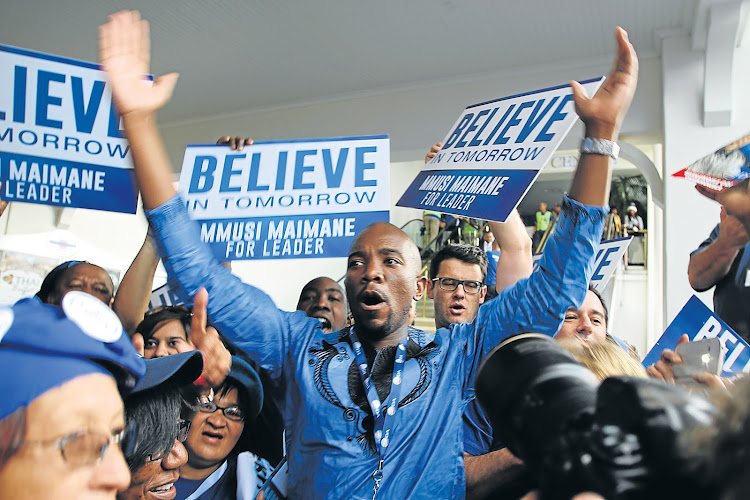 Mmusi Maimane on the day he was elected leader of the DA in Port Elizabeth
Image: Sino Majangaza

As speculation mounts that DA leader Mmusi Maimane is set to step down as leader of the party, we take a look back at what he said on 10 May 2015 when he was elected in Port Elizabeth:

Just moments after being named the new DA leader, Mmusi Maimane laid down the law, warning that South Africa’s biggest opposition party was no place for racists or homophobes.

In an emotive inaugural speech in Port Elizabeth, Maimane also warned that there was no room in the DA for those who sought to divide it instead of working to achieve its first objective of winning the country’s metropolitan municipalities, one by one.

His election at the federal congress, as the youngest and first black DA leader, marked a historic shift in South Africa’s political landscape.

On the podium at the Boardwalk International Convention Centre, Maimane  set the tone for his tenure as leader, saying that the goal was for the DA to wrest control from the ANC and to govern South Africa.

First up was Nelson Mandela Bay, the biggest city in a province he repeatedly referred to as “home”.

Speaking in isiXhosa – the language spoken by the majority of voters in the Bay –  Maimane  started his speech on a charm offensive, tracing his Xhosa lineage to his mother, a daughter of the Sidloyi clan, born in Cofimvaba.

Then he began his campaign for next year’s local government elections.

“Next year, I want to be able to say in parliament that it is [still] in a city governed by the DA,” he said.

“I want to say that President Jacob Zuma’s office at the Union Buildings is in a city, Tshwane, governed by the DA.

“Most importantly, I want to say that the municipality named after Nelson Mandela will be in a place governed by the DA.

“We can even win power in Johannesburg, our country’s economic heartland.

“When we leave Port Elizabeth today, every step we take will be one step closer to the Union Buildings,”  Maimane  said to loud cheers from the 1,400 delegates.

He appealed directly to the large, poor majority of South Africans the DA has battled to completely win over from the ANC.

“I know the difference that opportunity can make to a person’s life,” the new DA leader said.

“Like many people living in Gauteng, my parents were migrant labourers who had come to eGoli in search of a better life.

“My mother was raised in the Eastern Cape with six siblings.

“My father, landless and jobless, came from the former Bophuthatswana in the 1960s to settle in Kagiso on the West Rand.

“My parents worked hard to give us the opportunities they never had.

“I went to a state school in Roodeport and did well enough to get into university.”

Maimane told of a 25-year-old cousin who dropped out of school, did not have a matric certificate, was unemployed and, more tragically, unemployable.

This, he said, was the story of many young people who were not given opportunities to better their lives.

Maimane said while the effects that apartheid had on the country could not be forgotten, they should not trap people’s way of thinking.

“A fair society is also a nonracial society,” he said.

“And I want to make it absolutely clear today that non-racialism does not mean being colour-blind.

“It was a system that could put a pencil through your hair.

“A system that dictated where you could live and work, and who you could marry.

“These experiences shaped me, just like they shaped so many young black people of my generation.

“And that is why I simply don’t agree with those who say they don’t see colour.

“This doesn’t mean our skin colour must define us forever.

“The system of racial classification devised by Hendrik Verwoerd was evil and deplorable, and we cannot stay trapped in that way of thinking.”

In a television interview, Maimane ’s predecessor Helen Zille said she was not concerned by his age. He turns 35 next month.

“What makes  Mmusi  is what he has in spades, making his age a non-issue for me. It is that he recognises an opportunity. That is what you need in a  leader .”

Maimane, dubbed the “Obama of Soweto” for his talent for oratory and slick campaigning, took 88.9% of the votes cast to trounce his opponent, Wilmot James.

At a media conference later, Maimane said the newly elected leadership had set itself on course to build a nonracial party – a party that did not mobilise on the basis of race.

He did not believe that his election would necessarily attract more black voters, but said that the party would have to campaign hard to win over traditional ANC voters.

Asked about criticism that the DA was a party that catered for white minority interests, Maimane said: “Let me just say this clearly, if you are a racist, you mustn’t join the DA. You must join another party.

“Our party is for people who believe in a reconciled, non-racist South Africa – that’s why they’ve  elected  the leadership today.”

Asked how he planned to unite the party following a tense contest with James, he said James had a role to play in building the party.

“My commitment is to build a united party that can take the DA forward. People like Dr James have a role to play in our party.”