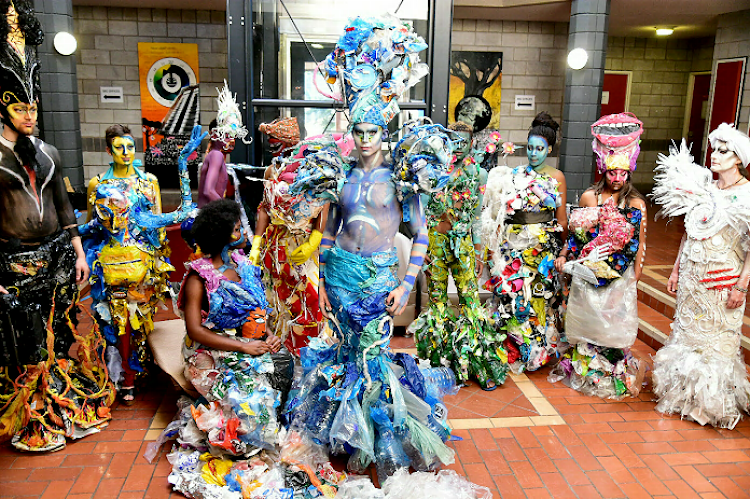 Student and performance artist Luke Rudman, front, dressed 10 models in outfits made from rubbish in a Greenpeace collaboration at NMU on Wednesday. Alexia Kalenga sits next to him as fellow models look on
Image: Eugene Coetzee

A shoal of sea monsters invaded Nelson Mandela University on Wednesday afternoon in an unusual piece of performance art devised by a first-year student for Greenpeace Africa.

Port Elizabeth art student Luke Rudman, 19, has been working for several months on the fashion-show-cum-political-protest to draw attention to the dangers of plastic pollution.

His event saw 12 body-painted models clad in aquatic costumes crafted from rubbish walk around the university’s south campus in Summerstrand to raise awareness of how to protect the ocean.

“I’m incredibly excited – I never worked on a body of work in secret for so long and I’ve been itching to share it,” he said of the event.

Rudman said it was part of the university’s Tributories Project, driven by philosophy lecturer Professor Andrea Hurst – who also modelled in the show – which focused on the use and abuse of water.

The eco-collaboration has the stamp of approval from Greenpeace Africa, which is giving Rudman an Instagram “takeover” for 10 days to highlight the dangers of plastic pollution to the environment.

“I’ll do a post on one creature a day and finish with a video about the project,” Rudman said.

Rudman has more than 10,000 followers on Instagram for his @Pseudellusion feed, where he posts images of his art, and Greenpeace Africa has 20,000 on @Greenpeaceafrica.

“Hopefully, there are a lot of things that will come out of this.

“This falls into a larger Greenpeace campaign where they are sending ships from pole to pole as part of their Protect the Oceans expedition.

“Plastic pollution is part of that and that’s where I fit in.”

Greenpeace ships Esperanza and Arctic Sunrise are travelling from the Arctic to the Antarctic to research climate change, overfishing, plastic pollution, deep-sea mining and drilling.

This is the first time Rudman has tackled such a large project since he hit the headlines with his body art in 2018 while in matric at Grey High School.

Rudman enrolled at NMU to do a BA in visual arts earlier in 2019.

Each person or art piece in the performance took about two hours to paint and dress, and he worked on the costumes for several months.

Documenting the performance is important as each artwork only lasts as long as the model is wearing the makeup and costume.

However, a live model had other benefits, Rudman said.

“If you are your own exhibition, you can take your art into spaces that it wouldn’t normally go into.”

Zama Ngeyane, 18, and Moses Mtsweni, 27, were among the students who stopped to watch and take photographs outside the Kraal.

“The awareness behind it is beautiful; it shows that there is so much one can do with what we see as waste,” Mtsweni said.

Ngeyane said of the performance: “It’s just ‘wow’ because it’s educational and artistic.

“You can see it has to do with recycling – it’s about how plastic is killing the oceans.”

“We did a three-day water pilgrimage and each pilgrim had to offer a response and this is Luke’s response.”

Model Mmeli Mdala, a second-year fashion student, said he enjoyed getting into character as a seaweed monster model.

“They are warning us every day that the earth is dying but people don’t seem to take it seriously,” Mdala said.

“We live in a windy city, so we have to be careful how we recycle plastic or more of it will end up in the sea.”