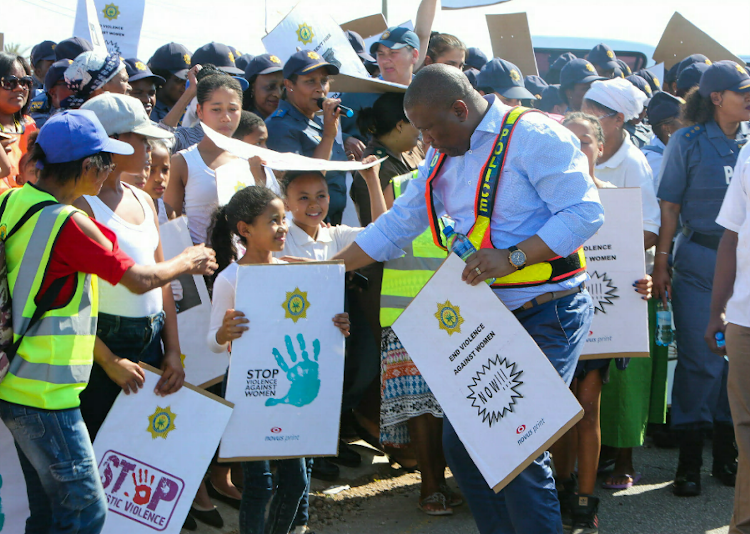 Premier Oscar Mabuyane greets children who attended an SAPS march against crime through the streets of Arcadia on Saturday
Image: Werner Hills

The moral fabric of Nelson Mandela Bay has degenerated to the point where crime is spiralling out of control and women and youngsters, in particular, are not safe.

Eastern Cape premier Oscar Mabuyane said this was why he was considering setting up a commission of inquiry to probe the high level of violent crime in the metro.

This is one of the interventions he is mulling over to not only make the Bay safer, but also create an environment that would be conducive to attracting investors.

Mabuyane said in an interview at the weekend preliminary investigations indicated an inquiry might be needed.

But he would know for sure once the SA Human Rights Commission briefed his cabinet on its findings.

In June, Protect Our Communities and Preserve Our Descendants asked the human rights commission to investigate the extent to which gangsterism has torn Port Elizabeth’s northern areas apart.

They also asked it to investigate the reasons for the gang violence in the area and the effect it had on schools.

Mabuyane said he was expecting to receive a report before his state of the province address in February 2020.

“Crime in Nelson Mandela Bay is getting out of control and it’s a situation that we must accept up front for us to develop proper strategies to combat crime,” he said.

“People are being killed left, right and centre.

“Crime is almost the order of the day.

“I am contemplating looking at serious interventions, how to investigate this matter, exploring the possibility of a commission of inquiry.”

He said the constitution allowed for a premier to appoint a commission of inquiry into issues that had got out of hand.

“The human rights commission has made the commitment to say it has that responsibility and we can work through it.

“We have to arrest what is going on in Nelson Mandela Bay – it cannot continue unabated.

“We are very concerned.

“It is almost eroding the moral fibre of society in Nelson Mandela Bay – women are not safe, young people are not safe generally.”

Mabuyane said should the investigations prove that a commission of inquiry was necessary, portfolio committees in the Bhisho legislature would be the first point of departure for setting up the commission.

“This [the metro] is our economic hub, this is where international investors are coming and it’s an environment that we must work very hard to protect for the development and prosperity of the people in this area and the province.

“We have to deal with crime to create a conducive environment for prosperity.”

He said the crime crisis in the metro was exacerbated by the political environment.

“Thugs are trying to control political organisations and to dictate what must be done.

“You can’t have governance being made vulnerable to that extent.

“[Crime has come in the form of gangsters and] people get used to gangsters – it’s a way of life in the northern areas and now it is spilling over to the townships in the form of amagintsa.”

To combat this, they would find money to ensure the police’s mandate was properly funded.

Mabuyane also said that a name change was on the cards for the provincial safety and liaison department, which would become the department of community safety – to ensure there was no confusion around what its function was.

Mabuyane was in the Bay at the weekend for various activities, including an anti-crime march by policewomen.

He also handed over 22 vehicles to the Humansdorp, Motherwell, Uitenhage and Mount Road police clusters.