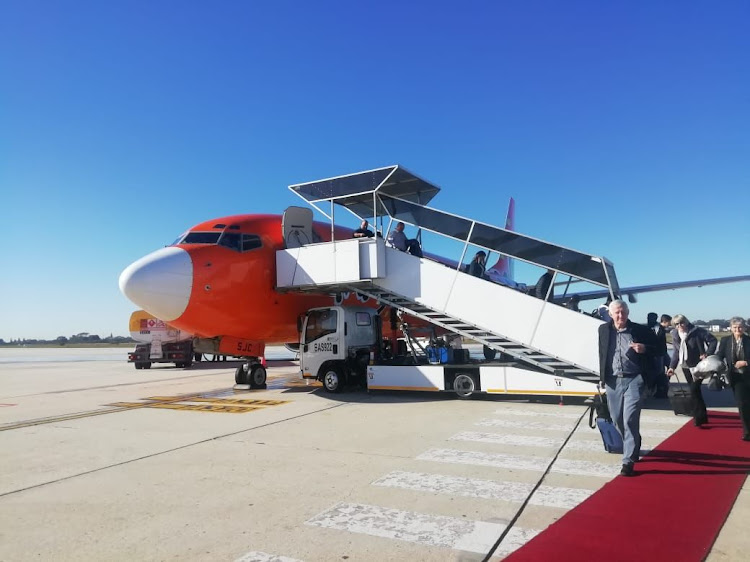 The first flight on the Port Elizabeth-Lanseria route landed at the PE International Airport on Thursday morning.

The route is regarded as a game-changer for business and tourism in Nelson Mandela Bay.

The introduction of the route is part of the municipality's airlift strategy.

The city has been working with the Nelson Mandela Bay business chamber and Mango Airlines to make the new route possible.

Mango Airlines general manager for operations Noelan Rungasamy said getting the route up and running had been seamless.

Rungasamy said he believed that the introduction of the new route would bring much-needed relief to passengers.

"Mango is very much pro-tourism. Making this a reality was seamless as all stakehoders came together to make it happen," Rungasamy said.

Rungasamy said the flight had been 85% full.

"The plan now is to market the route and let people know that it's there," he said.

"It's important for us to acknowledge the significance of Mango to trust Port Elizabeth Airport with this."

"Having engaged our department and especially our executive director [Anele Qaba] it has dawned upon me what a daunting task it is to clinch a reputable airline such as Mango," Daniels said.

Daniels said he believed the route would help those who could not afford more expensive flights.

"Mango is loved and it's one of the reputable airlines. Mango is bringing what is needed to address the knock-on effects of people who have been dispossessed."

Daniels said he too knew the struggle of trying to find an affordable flight.

"We can all attest to the challenges of sorting out logistics of flying.

"There are flights, but look at the price.

"We want to thank all the stakeholders who made this possible," Daniels said.