By Estelle Ellis - 11 June 2019
Nandipha Mayekiso, 29, at the place where her house stood
Image: Werner Hills

Clad in their pyjamas and shivering in the cold, about 80 Walmer township residents spent the early hours of Monday watching in despair as a ferocious fire destroyed everything they owned.

At about 3am, the Area Qextension residents, including five babies, were forced from their beds as their homes burnt to the ground.

According to the residents, the blaze was so intense that it destroyed the shacks in about half an hour – and nothing could be saved.

Within just 30 minutes, all that remained were 81 shellshocked people standing around in pyjamas with blankets wrapped around them, a pig, three dogs and a chicken.

The area was dense with smoke.

A fire rages in Walmer Township on Monday morning close to the Arlington tip
Image: Supplied

“This is the worst fire disaster we’ve had in Nelson Mandela Bay this year,” the Red Cross’s Coralie Peo-Swartz said.

As dawn broke four hours later, a sense of desolation set in.

The affected residents now have no identity documents, bank cards or clothes.

Keys, food, shoes, schoolbooks, furniture and bedding were all destroyed.

As they huddled in the Apostolic Faith Mission of SA church hall, some wore slippers and others were barefoot.

One woman had wrapped herself in a green blanket she had snatched from her bed as she fled.

“I don’t know where we will sleep tonight [Monday],” Nandipha Mayekiso, 29, said.

The fire started next to Mayekiso’s home, which has been reduced to ash.

“I just took my son and ran out. I was very scared,” she said.

Mayekiso and her neighbour listed the possessions they lost – a flatscreen television, four-plate stove, refrigerator, microwave, three-piece lounge suite and beds for everybody.

“I am still paying off the furniture,” Mayekiso said.

Thandazo Vunyiswa, 39, who works at the coffee shop at Builders Warehouse, said: “Everything is gone. We only have our pyjamas.”

Fikiso Mkrakra, 27, who shielded her eyes as she spoke, said: “I have a headache because I am scared.

“I don’t even have my son’s clinic card anymore. “There is nothing left. “I don’t know where we are going to sleep tonight.”

Mkrakra, who works at the SPAR, said: “I had to borrow clothes from other moms so that my son could go to school.”

In the nearly 10 years that Area Q-extension has been standing, there has never been a fire.

But the residents had always feared that it could happen, with the shacks built very close together.

Over the past weekend, the news of fires reached them three times.

The first fire, on Friday, took out a shack that was home to 10 people.

On Saturday, the shack of a man who had his three sons with him for the weekend burnt down.

On the same day, just a kilometre away, a man burnt to death inside his shack. Then the fire came for them. The Area Q-extension is a small community.

The residents all know one another. 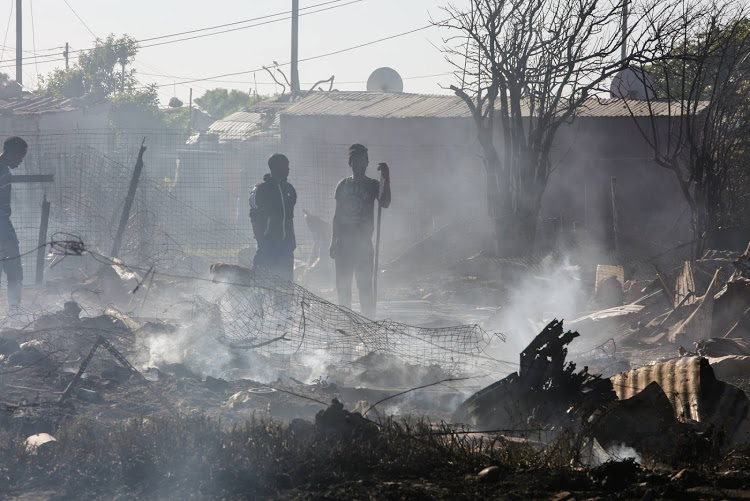 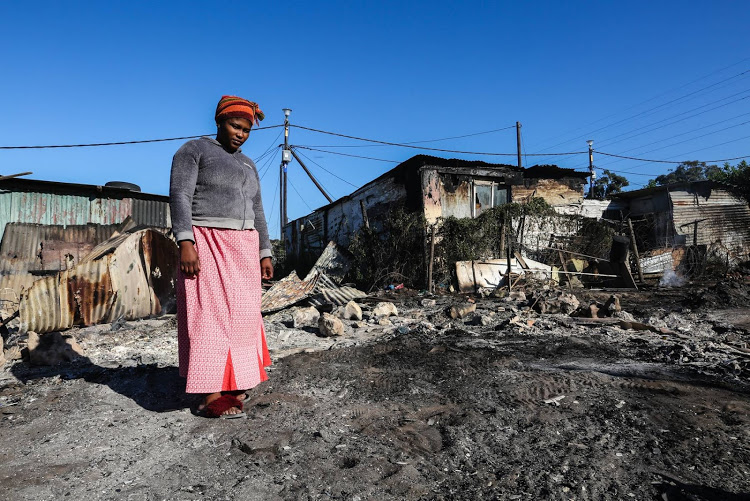 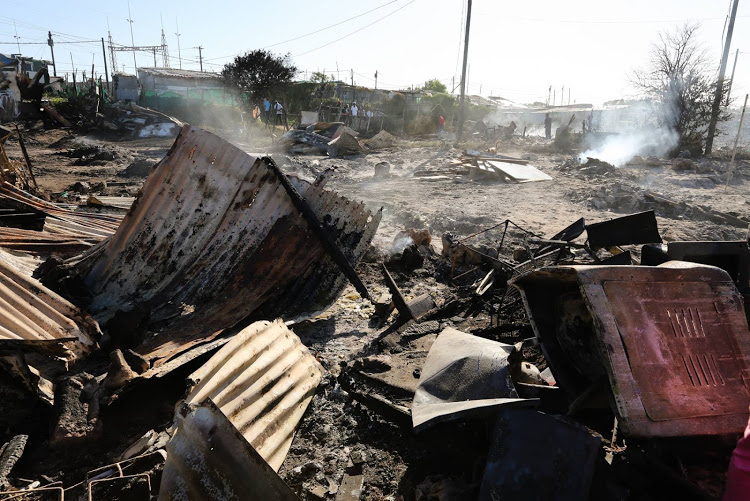 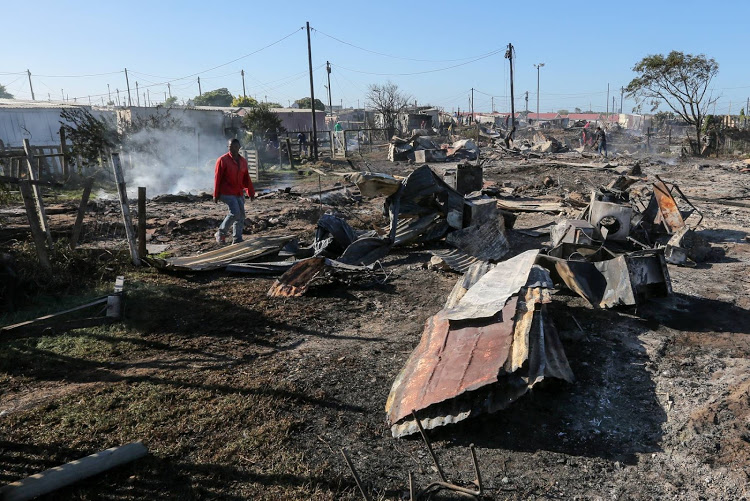 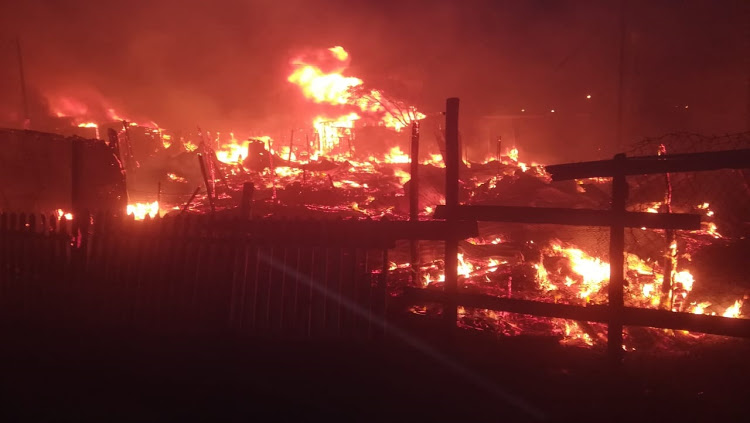 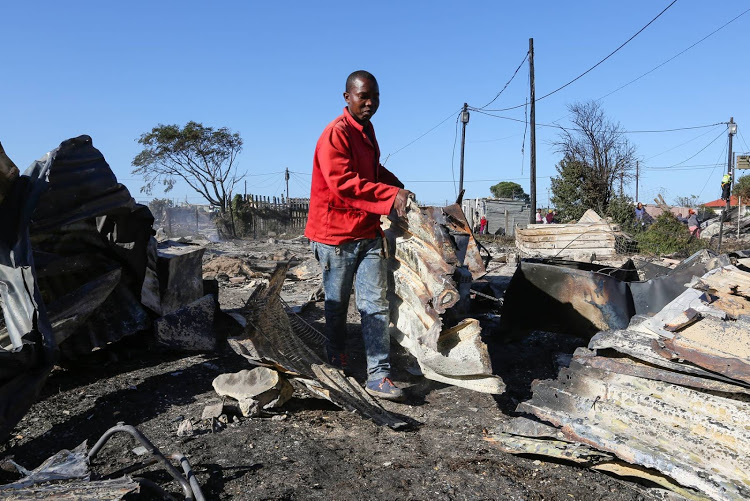 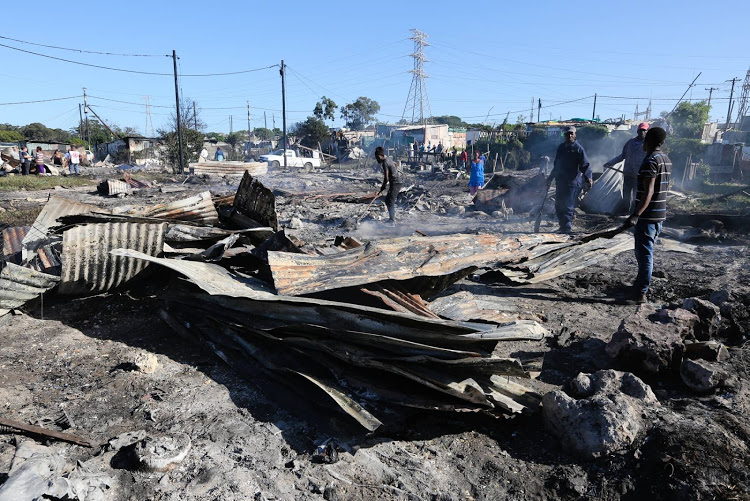 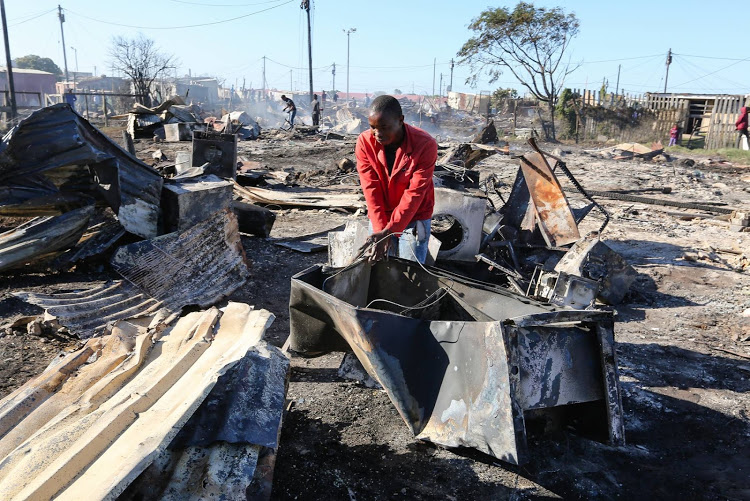 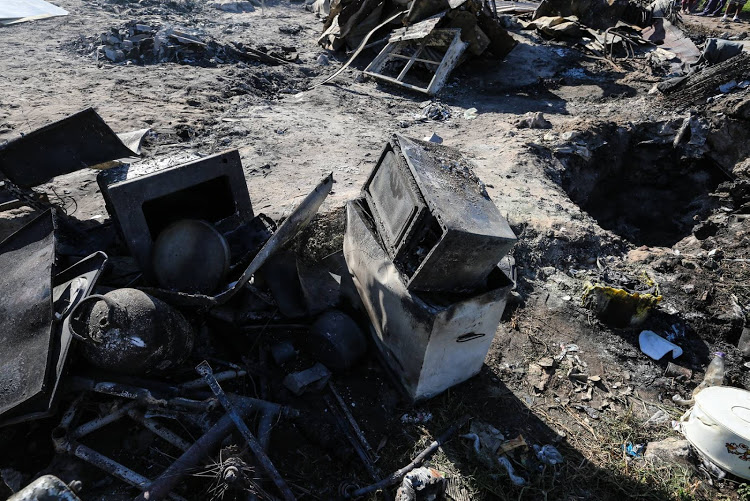 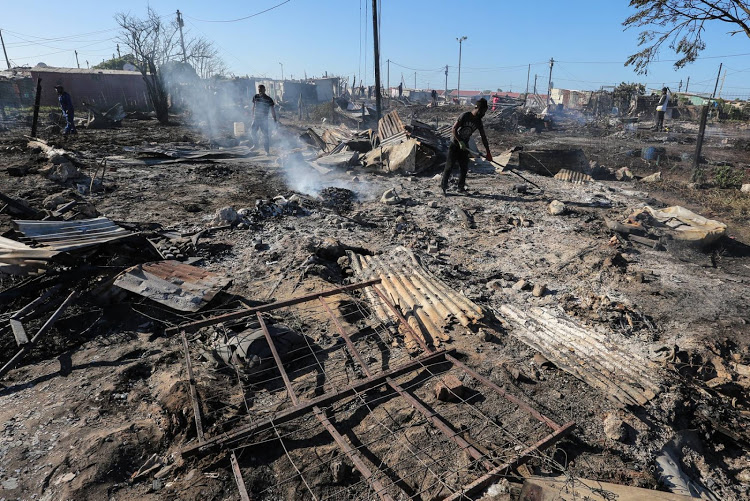 While some said they had heard the fire was caused by a man who had come home drunk from a tavern and passed out while cooking, there had been no official statement yet on the cause of the blaze.

In the church hall, disaster management officials set up a table and red plastic chair, with neatly covered books and files to record the names of those affected so that they can start planning how to help them.

By 10am, they knew that 24 shacks had been razed and 68 people were homeless.

Five hours later, the number of the homeless had risen to 81.

Ward councillor Ayanda Tyokwana shook the hands of the fire victims when he arrived at the hall. “The churches will help us,” he said.

“There is even a bishop who said they will help.”

A few hours after the fire, the soil was still so warm that it could be felt through shoes.

Men were digging in the rubble, hoping to salvage something.

They clapped and cheered when a bakkie arrived, loaded with wooden pallets, and were hopeful that they could start rebuilding soon.

“We need blankets, toothbrushes, toothpaste, soap, baby clothes and clothes for adults,” Peo-Swartz said. “Disaster management will give us mattresses but we also need blankets.”

Glenda Brunette, from nonprofit organisation Walmer Angels, visited the area to see where she could help.

“People are hungry.” Meanwhile, people who live across the road from the church and were not affected by the fire, asked: “Why is there still so much smoke?

“What if the wind starts blowing and the fire starts again?”

One woman said: “Maybe I must find a bucket with water.”

The queue at the communal tap was already long on Monday morning.

At lunchtime, members of the Concerned Citizens of the PE Metro arrived with a big pot of soup.

“We are collecting clothes for them and will take another big pot of soup tonight.”

Community leader Julia Mbambo said the residents who lost their homes would be accommodated at two churches, the second one being the Baptist Church nearby.

Police spokesperson Captain Sandra Janse van Rensburg said nobody had been arrested over the fire.

Municipal spokesperson Mthubanzi Mniki said the mayor and a team of officials would visit the area at 9am on Tuesday.

● There are several drop-off points for donations: The Red Cross offices in Richmond Hill, The Pantry-on-Main in Main Road, Walmer, and the Walmer Methodist Church.

Concerned Citizens of the PE Metro is also collecting goods.