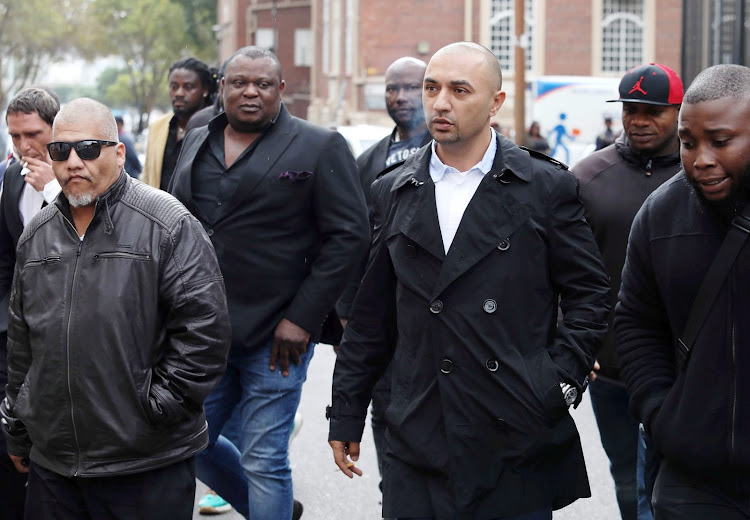 Nafiz Modack with his bodyguards outside court in April 2019 during his extortion trial.
Image: Esa Alexander

Govender was serving a four-year sentence in Malmesbury prison until Thursday, when  lawyer William King asked for his release on R5,000 bail for the corruption case.

The former policeman allegedly received payments from Modack, 37, and his mother, Ruwaida, 60, in exchange for favours that advanced Modack's "business interests".

King also applied for Govender's release on parole, claiming he was a "model prisoner", but no decision was taken. If parole is granted, Govender would have served only a year of his four-year sentence.

Dawjee, who is appealing his six-year sentence, was also in court on Thursday, apparently in support of Govender.

Modack, who is also standing trial on extortion charges in the Cape Town Regional Court, arrived at court surrounded by his standard entourage of about 10 bodyguards.

He strolled into court wearing a T-shirt emblazoned with the word "BOSS", an expensive suit jacket and jeans. Govender whispered to him in the dock.

Hawks spokesperson Capt Philani Nkwalase said the case was the second leg of the investigation that led to Lamoer and Govender's imprisonment.

Ruwaida was absent from court due to illness, according to lawyer Leon van der Merwe.

Govender was released on bail with strict conditions and was ordered to hand over his passport. State prosecutor Louis van Niekerk did not oppose bail.

According to King, the case against Govender related to events between 2011 and 2013 and was unrelated to the case for which he was currently serving a sentence.

The case was postponed until July 16. Ruwaida and Modack are both out on R5,000 bail,