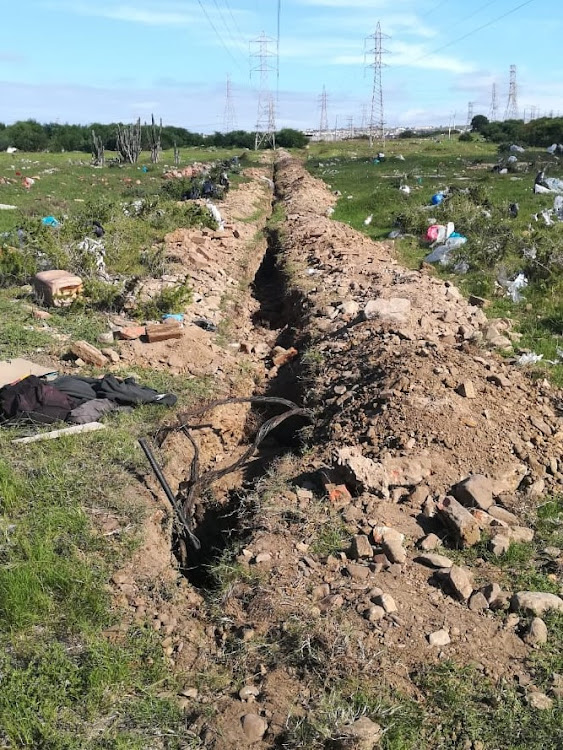 A Port Elizabeth police dog assisted in the arrest of two suspected copper cable thieves after they were caught red-handed trying to dig up the cable.

Naidu said that at 10am on Thursday, the metro’s surveillance unit noticed two men hiding in the bushes near Whyteleaf and Chase streets, in Algoa Park.

“The municipal officials contacted the K9 unit for assistance leading to Sergeant Volente Baatjies and her dog, Jack, responding to the call.

Baatjies arrived on the scene and went into the bushes. They crossed the ravine and dense bush to where the suspects were digging and confronted them,” she said.

“As soon as the suspects spotted the police, they made a dash to evade arrest but a further two members of the Surveillance Unit acted as a stopper group to prevent the suspects from escaping. This team work allowed Jack to be released and apprehend one of the suspects. After arresting him, Jack went after the second suspect and tackled him as well.”

Naidu said that prior to the men being caught digging up the cables, they had been spotted cutting the cables from the pylon at the same area.

“In an effort to curb the ongoing theft, the municipality installed alarm sensors on the pylons to monitor any movement in that area."

“The estimated value of stolen cables since 2018, in this particular spot, is more than R300,000. This cable is a vital communication medium between different electrical sub-stations, monitoring the ‘health’ of such sub- stations by the electricity directorate.

"Without a functional communication link, the municipality has no remote control over such sub-stations from a technical management perspective,” Naidu explained.

“It is a huge problem. We will continue to work with our partners in ensuring that perpetrators of such a crime are arrested and brought to book. We are also appealing to scrap metal dealers to inform us when these copper cables are brought in for sale,” he said.

At the time of the hijacking, only the 34-year-old driver was inside the vehicle as he was still en route to collect schoolchildren in the area. Both suspects, aged 21 and 55, were detained under the Criminal Matters Amendment Act for tampering, damaging and theft of essential infrastructure.

Both men will appear in the New Brighton magistrate's court on Friday.