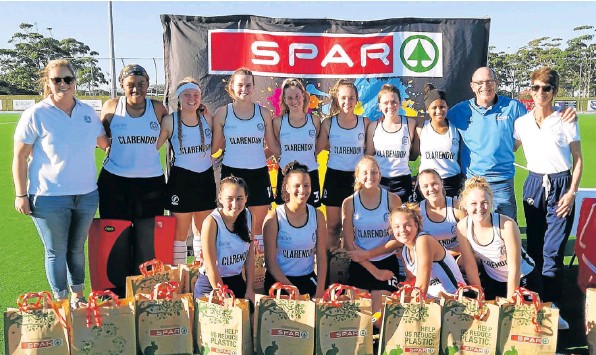 Clarendon Girls’ High reclaimed the title in the East London Coastal leg of the SPAR Eastern Cape Schoolgirls Hockey Challenge by edging out Hudson Park in a thrilling final on Sunday.

Played at Clarendon in East London, the hosts, who won the title in 2017, narrowly defeated the defending champions when national squad member Bianca Wood scored a goal in the dying minutes of the game to claim victory with a score of 2-1.

With matches being played in a shortened format of 20 minutes, tournament director Bev Forword said the tournament produced another exciting day of quality hockey.

“It really was an awesome day of hockey and we were all spoilt by SPAR, and it was great to have the support of friends and families during the day,” she said.

The play-offs, she said, were “super exciting”, with the schools going all out to produce their best effort.

The battle for seventh spot was keenly contested, with Alphendale scoring near the end to defeat Greenpoint.

“Lilyfontein pulled out all the stops against Merrifield and a short corner goal by Megan Emslie gave Lilyfontein the edge for fifth place, while Stirling dominated Cambridge to finish third,” Forword said.

The final was a repeat of last year’s deciding match, with Wood scoring twice for Clarendon to see them qualify for the provincial finals at the end of July.

SPAR EC sponsorships and events manager Alan Stapleton said the standard of hockey was excellent and he congratulated all schools on the spirit in which the game was played.

“Although Clarendon and Hudson Park have been the dominant sides, it was highly encouraging to see some of the smaller schools competing with such distinction during the day,” he said.

“This tournament is all about providing opportunities for all schoolgirls, with an emphasis on team spirit and support from the family,” Stapleton said.

“I would like to pay tribute to all the mothers who turned out to support the teams for a special Mothers’ Day event.”

Clarendon now join Diocesan School for Girls as the two qualifiers so far for the provincial finals on July 27 and 28, which will be played at Collegiate in Port Elizabeth.

The next two qualifying tournaments take place on Sunday when the PE Central leg is held at Alexander Road and the East London Inland tournament is played at Kingsridge in King William’s Town.