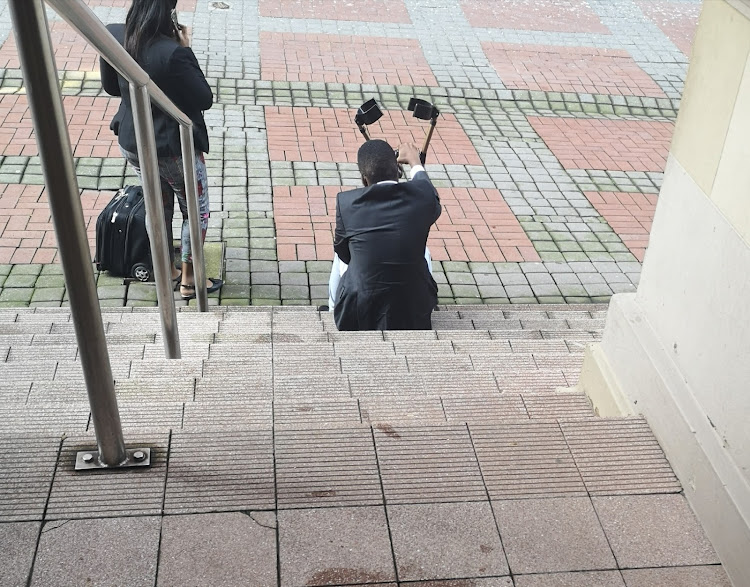 The man accused of killing Durban escort Siam Lee waits outside the Durban High Court after his appearance on Wednesday.
Image: Suthentira Govender

The 30-year-old businessman accused of the brutal murder of Durban escort Siam Lee hobbled on crutches into the dock when he appeared in the Durban High Court on Wednesday.

The matter was due to be heard on Thursday but was brought forward.

Smartly dressed in grey pants and a blue blazer, the man, who cannot be named, stood in the dock of Court A with his walking aids for barely five minutes before judge Shyam Gyanda postponed the matter.

State prosecutor Cheryl Naidu told the court that the matter had been set down for a pre-trial hearing but the defence was not ready to proceed for various reasons.

She did not site any of the reasons.

Gyanda told the accused that his bail was extended and adjourned the matter to July 29 for the pre-trial hearing.

Minutes later, a Verulam man accused of keeping his 10-year-old stepdaughter as a sex slave and raping her over 900 times, also made a brief appearance in the same court.

The man cannot be named in order to protect the identity of the child.

The man was arrested in June last year after the child confided in a neighbour about the alleged abuse.

Charges include rape‚ sexual assault‚ sexual grooming of a minor and exposing a minor child to pornography.

Gyanda remanded the man into custody and also adjourned his case to July 29.