One suspect killed, another injured in shootout with police 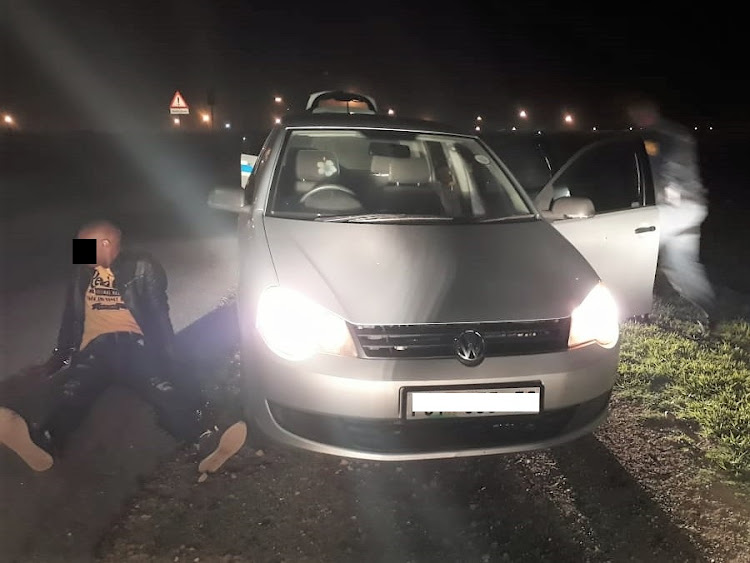 The injured getaway driver who was shot in both legs sits next to the hijacked polo after a shootout with police.
Image: supplied

A suspect was killed and another shot in both legs during a shootout with Port Elizabeth police on Monday night.

According to police, the shootout happened less than an hour after a group of four men - some armed with pistols – allegedly robbed a couple in Mahlahla Street, KwaNobuhle, at about 8.45pm.

The suspects sped past a police vehicle while attempting to flee prompting the car chase and shootout.

Police spokesperson Captain Andre Beetge said prior to the shooting the men had allegedly hijacked a polo during a house robbery in KwaNobuhle – on the outskirts of Uitenhage.

“Three men arrived at a house in Mahlahla Street and started calling the owner’s name outside. He went outside to investigate when the three suspects accosted him.

"He was held at gunpoint and forced back into the house where the owner and his wife were tied up,” he said.

“The suspects threatened the couple and demanded their VW Polo keys before rummaging through the house to find valuables. Within 15 minutes the suspects had driven off in the Polo.”

The couple managed to free themselves and call for help.

“At about 9.30pm, members from the Motherwell Operational Command Centre spotted the car when it went speeding down the R335. The Polo overtook the police vehicle at high speed which is what raised the alarm,” Beetge said.

“A car chase ensued and while chasing the vehicle, the Polo’s back doors were opened and shots fired at police.

"Police returned fire leading to the vehicle coming to a standstill in the road.”

Beetge said as the car stopped, the four suspects jumped out – two from either side of the Polo.

“Two of the suspects were shooting while two managed to escape during the shooting."

During the shootout the driver of the Polo was shot in both legs while one of the other suspects was shot in the chest and died on the scene.

“The only weapons found near the two suspects were two replica toy firearms. The other two suspects who escaped are believed to have had the real firearms,” he said.

“The identity of the deceased is unknown as police are attempting to gather details of who the suspects are.”

The 25-year-old injured suspect was taken to hospital under police guard.

Motherwell Cluster commander Major General Dawie Rabie welcomed the arrest and said there is a team of detectives who are working to track down and apprehend the two that escaped.

"Once arrested, we will look at charging the suspects with the murder of their colleague,” he said.

“The fact that some of these suspectswere armed with replica toy guns is worrying and we are warning those who are supplying or carrying these replica firearms, we will charge you if these realistic looking toy guns are used in a crime.”

He said detectives from Port Elizabeth and Uitenhage Cluster were working together to ascertain if the men are connected to other house robberies and hijackings.

A case of house robbery, pointing a firearm at police officials, attempted murder and hijacking are being investigated.

Once the wounded suspect is discharged from hospital, he will be charged for house robbery and hijacking in the Uitenhage Magistrate’s Court and then attempted murder of a police official in the Motherwell Magistrate’s Court.