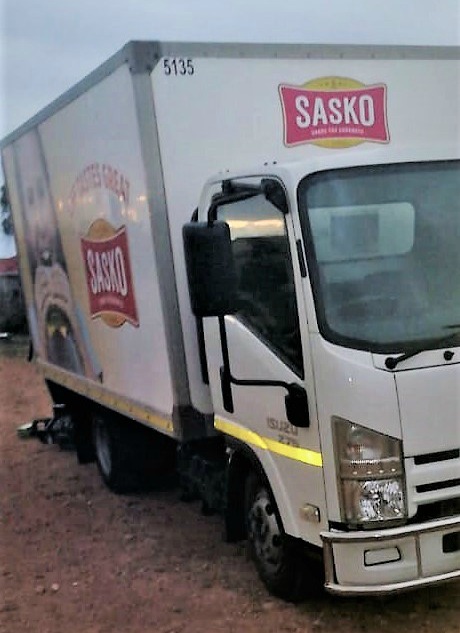 Thieves made off with half of the delivery consignment after hijacking a Sasko bread truck on Thursday morning
Image: Supplied

A gang of thieves made off with numerous loaves of bread after hijacking a bread truck and taking three Sasko delivery employees hostage on Thursday.

The hijacking took place at about 5.15am outside Tayaka Shop, in Gugura Street, NU5  Motherwell.

This is the third delivery vehicle hijacking that has taken place in the Bay this week.

Police spokesperson Colonel Priscilla Naidu said the staff were doing  their first delivery of the day when the suspects struck.

“The delivery staff were waiting outside the store for it to open when two gunmen approached the vehicle.

"At the time, one of the driver's assistants was knocking on the shop door while the other one was busy opening the back of the truck to take out the bread,” she said.

“The gunmen rounded them both up before heading to the driver and forcing him out of the truck at gunpoint. All three were then locked up inside the back of the truck.”

Naidu said the gunmen drove off with  the truck before stopping in a nearby street where the staff were taken out and forced into a white car parked at the spot.

“There were more suspects waiting inside the car and they drove off with the three staff members,” she said.

“They took them to a location somewhere in the bushes of Wells Estate where they were forced out of the car and left behind.”

Naidu said one of the employees managed to alert the company who then in turn called the police. No one was injured during the incident.

“The truck was found abandoned about a hour later in Ngwevana Street, Motherwell. Half of the stock in the truck had been stolen,” she said.

One was hijacked in Motherwell while transporting medicine and another in Cleary Park while delivering cellphones to a nearby store.

All three cases are under investigation and no arrests have been made.