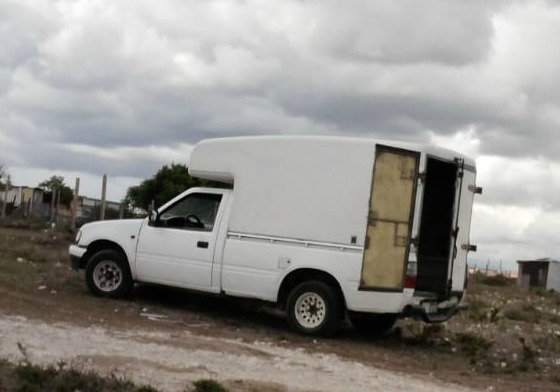 The delivery van that was recovered shortly after it was hijacked in Motherwell on Monday morning
Image: Supplied

Two courier delivery vans were hijacked in separate incidents in the Bay on Monday morning.

The latest incident saw a courier driver hijacked while off-loading cellphones in the parking lot of the Cleary Park Shopping Centre at about 10.45am.

Police spokesperson Captain Sandra Janse van Rensburg said the 26-year-old driver had just opened the back of the delivery van when he was approached by three men.

“They took the keys from him and locked him in the back before driving off in the van.”

The men stopped the van about a kilometre away in Third Avenue, Hillside.

“The suspects then opened the back and took 30 new cellphones which they loaded into a Ford Icon before speeding off," Janse van Rensburg said.

“The courier driver was left behind and he alerted the police.”

About an hour prior to the hijacking, another courier van transporting medicine was hijacked in Gotyiba Street, in Motherwell at about 9.45am.

According to officials, two gunmen driving a red vehicle approached the courier van when it stopped in the street.

They forced the driver and passenger out of the van and sped off. The vehicle was recovered abandoned about half an hour later on a farm on the outskirts of Motherwell.

Janse van Rensburg said no one was injured during the hijackings.

Two cases of hijacking are under investigation.