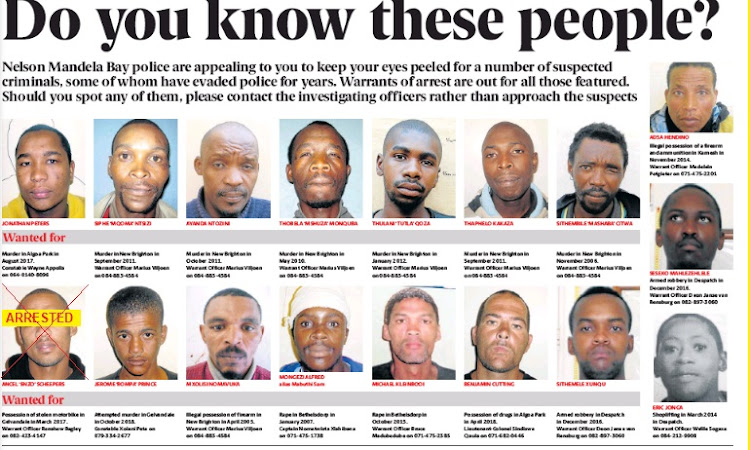 One arrested within hours of picture being in The Herald
Image: The Herald

One of the men who was listed as wanted by the police since last year has handed himself over.

Ancel 'Enzo" Scheepers was one of the 17 wanted suspects – all of whom have warrants of arrest – published in The Herald on Friday.

Police spokesperson Captain Sandra Janse van Rensburg said Scheepers handed himself over at the Gelvandale Police Station at about 9am on Friday morning.

Scheepers was wanted for a case in March 2017 after he was caught allegedly with a stolen motorbike in his possession.

“He was at the station this morning after his mother noticed his picture in the newspaper. She contacted the police station and the suspect (Scheepers) then came to hand himself over,” she said.

Scheepers will appear in the Gelvandale Magistrates Court on Friday.

Police are urging anyone who spots one of the wanted people on the list to contact the detective immediately.

“The police welcome and appreciate the positive partnership between The Herald and the organisation.

"Successes such as this indicates the important role that media plays in fighting crime and ensuring that criminals are arrested and brought before court,” Janse van Rensburg said.