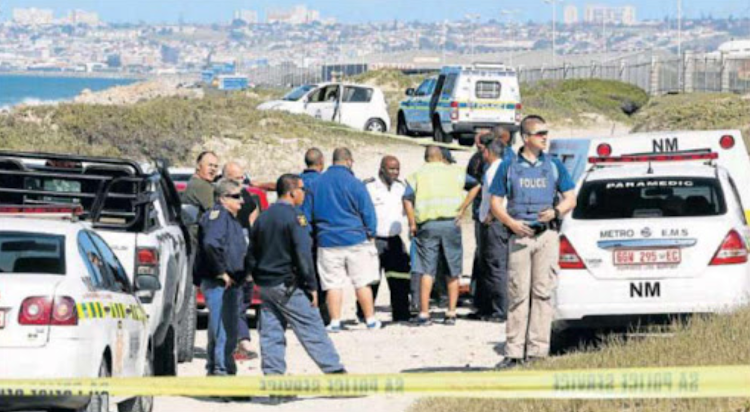 Police and emergency services staff gather at Brighton Beach in Port Elizabeth after the body of Thabang Ngwekazi, 28, was found.
Image: Eugene Coetzee

Contradictory evidence sealed the deal for two men who were convicted on several charges, including the murder of a student paramedic.

Handing down judgement in the Port Elizabeth High Court on Wednesday, judge Elna Revelas did not hold back when she convicted Thulani Jusaya, 20, and an 18-year-old, who cannot be named as per a court order, of the August 2016 murder of Thabang Ngwekazi, 28, the kidnapping of Ngwekazi and his girlfriend, assault and robbery among others.

At the beginning of the trial, Jusaya pleaded guilty to all charges against him including two charges of rape but denied any involvement in the murder of Ngwekazi.

The 18-year-old charged, with two counts of kidnapping, two of robbery with aggravating circumstances and murder, pleaded not guilty.

A third suspect, Xola Njoloza, 27, was acquitted on all charges.

Revelas said Jusaya and the 18-year-old were poor witnesses and they had contradicted themselves when giving evidence.

Specifically Revelas stated that Jusaya’s version of how Ngwekazi was shot and killed was fabricated and untruthful.

Jusaya and the 18-year-old made several allegations that they were acting under the orders of a man only identified as Fish. It later emerged that the man referred to as Fish had died.

“Despite the plea of guilty … [Jusaya] tried to convince me that he was acting under the duress of Fish.

"This is a clear demonstration that [Jusaya] was an untruthful witness,” Revelas said.

Revelas found that the testimony of Ngwekazi’s girlfriend, who cannot be named as she is a victim of a sexual crime, was truthful and accurate.

“In my view, the complainant was a very good witness. She was calm and methodical and remembered details very well. She endured a terrible ordeal and referred to other aspects, which helped her have a very clear recollection.”

Revelas found that evidence in the form of plea explanations given by Jusaya and the 18-year-old proved several incidences of common cause.

This included that, on the night of August 13 2016, both men were in the company of Fish and another person identified as Mbiwe and had decided to go to Central to buy drugs.

On their way they spotted a VW Polo parked in Prince Alfred Street, North End.

It was decided they would hijack the car and subsequently Ngwekazi and his female companion were forced into the boot of the car.

Jusaya and Fish then took the pair to the beachfront, where Ngwekazi was shot and killed before his body was dumped in the ocean.

Ngwekazi’s girlfriend was raped by both men before being driven to Central and dropped off there.

Sentencing proceedings are expected to begin on April 23.