One arrested at 4am on Friday 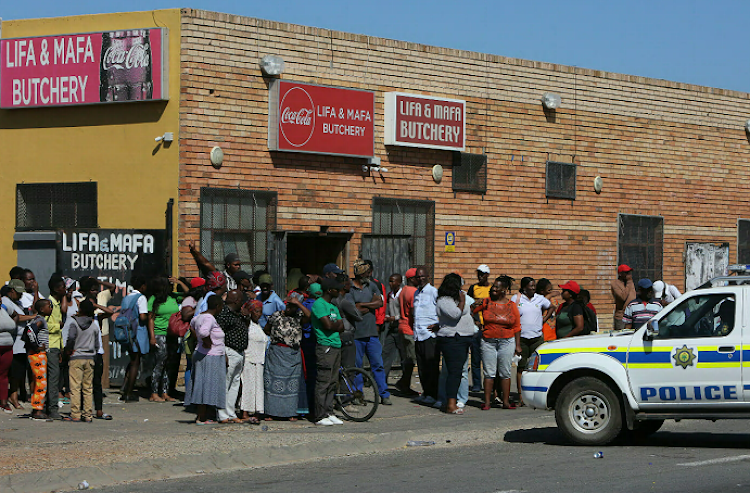 Crowds gather at the Lifa and Mafa Butchery where Baba Ningi was shot several times on January 28.
Image: Werner Hills

A man has been arrested for a suspected SMME hit murder as police close in on a gang which is believed to be responsible for a spate of recent killings.

The arrest comes after Mkhuseli “Khusta” Yani, 40, was gunned down in a tavern in Chalumna Street, Motherwell, last Saturday.

Yani was killed when three gunmen stormed the tavern shortly before midnight and started shooting.Yani and a friend he was inside the tavern with were shot.

Yani died at Motherwell Community Health Centre shortly after arrival while the other victim, a 35-year-old man, is still in critical condition.

Police are declining to release the survivor’s name in fear that he will be targeted.According to officials close to the case, Yani is linked to a construction SMME operating out of the Bay’s northern areas.

On Friday morning, police located one of the suspected hit-men, a 40-year-old man, who was tracked down to a house in Goodwin Road, Sydenham.

Police spokesman Captain Andre Beetge said: “Police raided the house and found the man inside. When they searched his Mercedes Benz they found a loaded pistol, with a bullet in the chamber, as well as two spare magazines.

A total of 23 rounds of ammunition were found,” Beetge said.Asked about links to other hit murders, Beetge said the probe was at a very sensitive stage.

“The firearm has been sent to the ballistic unit to establish if it can be linked to the other crimes,” he said.

Describing last Saturday’s shooting Beetge said: “According to our information, three gunmen entered the tavern and opened fire, killed the one person and injuring another.

The men then ran off. The police were alerted to the shooting but on arrival, both victims were taken to hospital,” he said.

“The hospital then alerted police to two men with gunshots wounds linked to the tavern shooting.”

Insiders have said the same suspect is possibly linked to the killing of Black Business Caucus co-ordinator Baba Ningi, 48, on January 28 – which was the first of several related murders.

Then Marina Ntamo, 37, was shot dead in Tshangana Street just two days later.Since Ningi’s murder there have been at least 14 hit-style murders – mostly in the Motherwell and New Brighton areas.

“More arrests are coming and leads are still being followed up,” Beetge said.

The suspect will be appearing in the Motherwell Magistrate’s Court on Monday where he will be charged with Yani's murder and the attempted murder of the survivor.

Additional charges include illegal possession of an unlicensed firearm and ammunition.