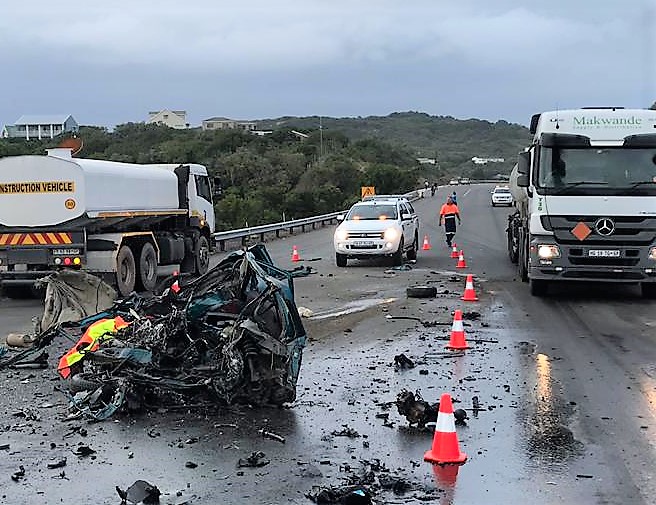 Emergency workers attend to the scene on the R72 near Port Alfred where one person died when a car collided with a truck.
Image: supplied

Three people were killed in two separate head-on collisions with trucks on Eastern Cape roads at about 7.30am on Tuesday.

The first reported crash involved a truck and a car on the R72 between Kleinemonde and Port Alfred. Emergency services closed the road for about two hours, leaving only one lane open.

According to officials, as a result of impact, the truck veered off the road, down an embankment and caught alight.

“The truck caught fire during the collision, but the truck driver escaped unharmed," he said.

"The sedan driver was not so lucky. He was declared dead on the scene.”

In another fatal crash, at about the same time, two people were killed in a collision between a Toyota bakkie and a truck on the N2 near Butterworth.

“Both occupants of the bakkie died on impact, while the truck driver escaped unscathed.

"The accident occurred as wet and slippery conditions with poor visibility persist in most parts across the province,” he said.

Three cases of culpable homicide has been opened at the respective police stations.