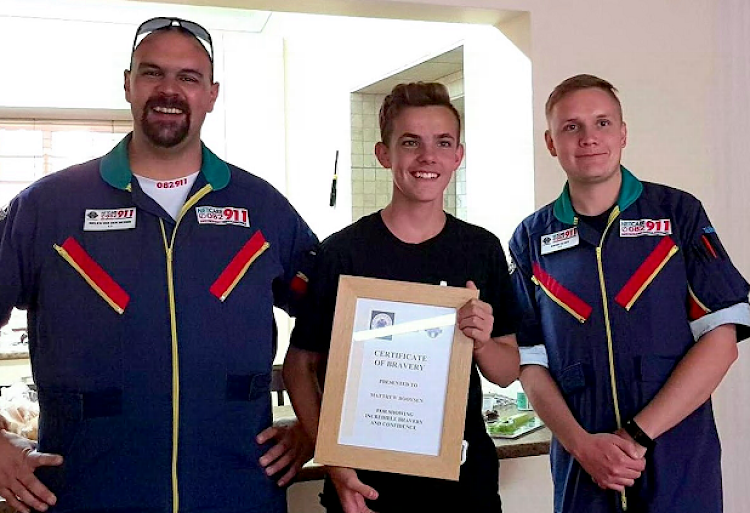 A teenager has been applauded for his bravery after he helped to save the life of his father‚ who was shot in both shoulders during a house robbery in Johannesburg.

Matthew Booysen‚ 14‚ was awarded a Netcare 911 certificate of bravery for facing up to intruders during the home invasion in Mulbarton‚ in the south of the city‚ on October 3.

His father, Benny, had tried to shut a sliding door to prevent armed intruders from bursting into the house, but was shot in the process.

Matthew ran for cover‚ dodging a gunshot‚ but upon realising that his father had been shot‚ returned to face the criminals.

“Matthew returned to confront the men‚ pleading with them to stop shooting and insisting on helping his father,” 911 paramedic Nielen van der Merwe said.

“The men demanded to know where the valuables were and proceeded to ransack the house.”

Matthew then started treating his father‚ using towels to try to stop the flow of blood from his wounds.

Benny suffered four gunshot wounds to the chest and shoulders‚ a punctured lung and a shattered shoulder bone.

Matthew helped his father to get to the family car and tried to drive him to hospital.

But not knowing how to drive‚ he stalled the vehicle and crashed it into the garage.

They managed to get to their complex’s main gate‚ about 100m away‚ where the teen started shouting for help.

Van der Merwe and Dayne Olsen were manning an intensive care ambulance that transferred Benny from the emergency department at Mulbarton Hospital‚ where he was stabilised‚ to the Union Hospital in Alberton.

The paramedics felt strongly that the teen’s heroic actions should be acknowledged.

“Netcare 911 wanted to honour a young man who showed incredible courage and presence of mind during an exceptionally traumatic ordeal for him and his family‚” Netcare said.

Matthew‚ who is a keen Boy Scout‚ was presented with a certificate and a first-aid kit so he can help others in the future‚ should he need to.

His mother‚ Samantha‚ said: “Matthew’s bravery and calmness at the time were incredible. My husband and I are immensely proud of him.”

Benny is recovering at home after surgery to remove the bullets and repair a damaged artery.

The surgeon, Dr Samuel Asi Gyebi, said he was not yet able to use his hands due to nerve damage caused by the bullets.

They will require plastic and reconstructive surgery.- TimesLIVE