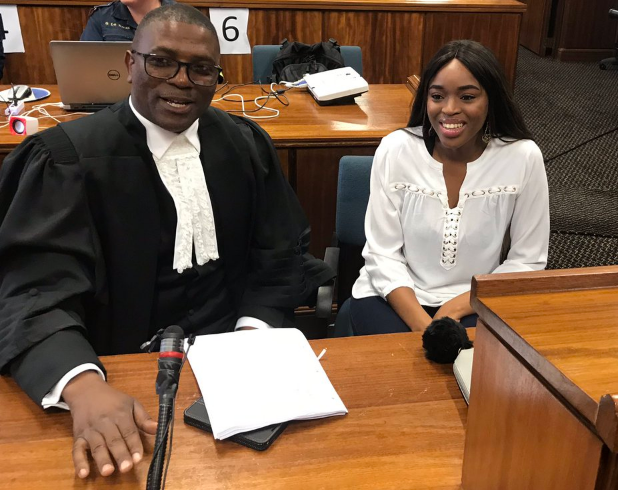 As Cheryl Zondi rapidly rises as the face of South African rape survivors, civil society has called on Nelson Mandela Bay residents to support the young woman who has stoically faced days of unrelenting cross-examination following her testimony in the Timothy Omotoso rape trial.

Zondi, 22, has spent three gruelling days on the stand in the Port Elizabeth High Court intimately detailing her alleged rape at the hands of charismatic televangelist Timothy Omotoso, 60.

She has also fended off a barrage of questions – many of which have outraged the public – from defence attorney Peter Daubermann about Omotoso’s penis size and how far she was penetrated. On Wednesday, members of anti-gender-based-violence campaign #TotalShutDown called on activists to mobilise outside the Bird Street courthouse.

They were joined in their cries by thousands on social media who pledged support for Zondi, with a poster sporting the Black Power fist and Zondi’s name shared thousands of times online.

#TotalShutDown regional spokesperson Gretchen Sudenie said the movement had been mobilising throughout SA to pledge solidarity with Omotoso’s alleged victims.

Sudenie said it was alarming to see the amount of support Omotoso and his co-accused were receiving – especially from women.

“We won’t blame the women. I love them and I know that they have been brainwashed and there is nothing one can do to change their state of mind,” she said.

Fellow activist Nolitha January, 21, said it was important that Zondi received all the support possible.

“Every day when [Zondi] is testifying she always appears strong, all because she wants justice, but she needs support to go through the trial.

“Zondi is brave and represents all the rape victims whose cases are thrown out of court because they didn’t have the strength to continue with the brutality of the cross-examination process,” January said.

Omotoso, along with co-accused Lusanda Sulani, 36, and Zukiswa Sitho, 26, face a total of 97 charges among them, ranging from human trafficking to rape and sexual assault.

When the proceedings started on Wednesday morning, Daubermann registered a complaint with the court claiming that state prosecutor Nceba Ntelwa had not furnished him with psychological reports on the alleged victims as well as a comprehensive report.

Daubermann told judge Mandela Makaula he was only given the reports before court started and needed time to peruse them and possibly consult with a private psychologist. Makaula said he would allow Daubermann time to  consult with the necessary experts and his clients in this regard but refused to postpone the matter.

During the morning session, Daubermann presented Zondi with photographs of her and other members of the church during a trip to Israel.

He questioned Zondi about her apparently happy and excited demeanour. Zondi said she’d had to appear happy.

“Not putting on a front meant going against the instruction and authority this man [Omotoso] had,” she said.

Zondi remained confident and calm during the questioning, until Daubermann began pushing as to why she had not confided in anyone about the alleged abuse after she left the Durban property where she had stayed with Omotoso and several other young women. 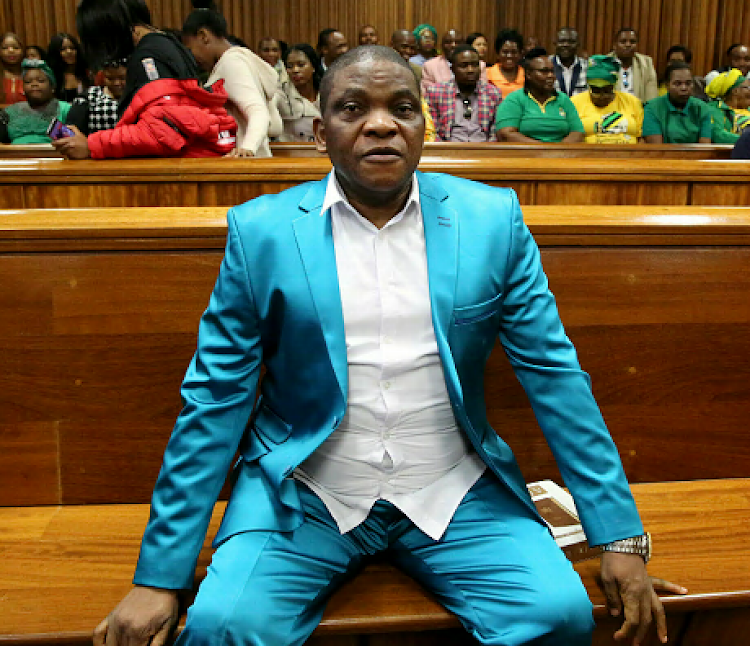 Zondi left the Durban house in August 2015. She, along with her mother, had arranged with an aunt and cousin for Zondi to get away from the house and Omotoso, Zondi told the court.

She said she had gone to Durban after she attended a Jesus Dominion International church crusade in Port Elizabeth in May 2015.

Asked how she was transported to Durban, Zondi said she could not recall the exact details but knew transport had been arranged by Sulani.

Pressed on why she had not attempted to contact anyone or make a plan to escape Omotoso’s control before August 2015, Zondi said that she needed a clear plan before making a move.

She said it was after her escape that she had begun opening up about what had happened, and she eventually saw a therapist only after her family had noticed a change in her.

Asked why she never reported the alleged abuse to the police, Zondi said she could not trust them because she knew some of the church members were police officers.

“How could I trust the police [when some of them] took off their jackets and put them on the floor for [Omotoso] to walk on.

“[Omotoso] encouraged them to wear their uniforms and, at services, he would encourage them to stand in front of the congregation and say how much they adored him and that they would protect him,” she said.

Before postponing the matter to Monday, Makaula wished Zondi well with her upcoming exams.

Zondi is a second-year marketing student at the University of Johannesburg and has been on the stand since Wednesday last week and as a result has already missed one exam.

She has another exam scheduled for Monday and Makaula earlier said it would not be ideal for her to miss it. Outside court, chaos erupted when Omotoso’s supporters, who have been stationed outside since the trial started last week, went head to head with members of the #TotalShutDown movement.

Daubermann was followed to his car at the back of the court building by those supporting Zondi, with the group hurling insults and, at one point, throwing water at him.

He was escorted to his car by police.

A new witness is expected to take the stand on Monday. Meanwhile, the Commission for Gender Equality will approach the judiciary and the General Council of the Bar to discuss the “unfair” treatment of rape victims.

The decision follows an outcry over Daubermann’s “insensitive” questioning of Zondi.

“Although the Commission for Gender Equality respects the independence of the judiciary‚ gender blindness cannot be used as a source of inadvertent secondary victimisation,” commission chair Lulama Nare said.

“It is plainly unfair to subject them to such inhumane treatment‚ whereas those who did the act are treated favourably. ” 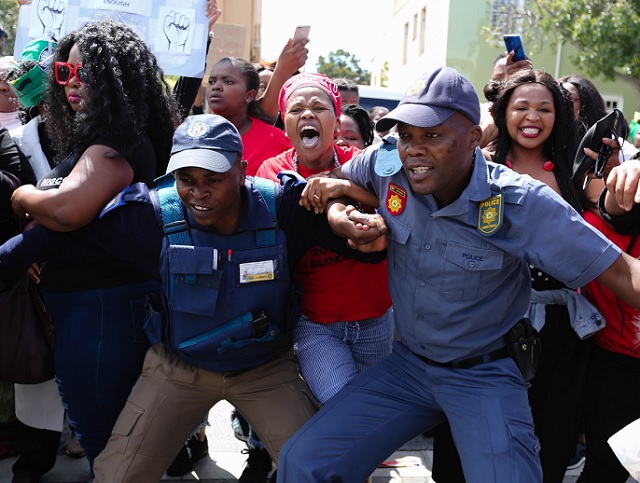 Supporters of causes both for and against controversial televangelist Timothy Omotoso clashed outside the Port Elizabeth High Court on 17 October, 2018.
Image: Werner Hills

They were joined in their cries by thousands on social media who pledged support for Zondi, with a poster sporting the Black Power fist and Zondi’s name shared thousands of times online.

#TotalShutDown regional spokesperson Gretchen Sudenie said the movement had been mobilising throughout SA to pledge solidarity with Omotoso’s alleged victims.

Sudenie said it was alarming to see the amount of support Omotoso and his co-accused were receiving – especially from women.

“We won’t blame the women. I love them and I know that they have been brainwashed and there is nothing one can do to change their state of mind,” she said.

Cheryl Zondi, who on Tuesday testified about rape and human trafficking accused Pastor Timothy Omotoso's "intense" hold over her returns to the stand ...
News
3 years ago

Judge Mandela Makaula told attorney Peter Daubermann on at least three occasions to change his line of questioning or to simply not ask certain ...
News
3 years ago

Charismatic Nigerian pastor Timothy Omotoso’s wife Taiwo took centre stage during his trial in the Port Elizabeth high court on Tuesday when she was ...
News
3 years ago