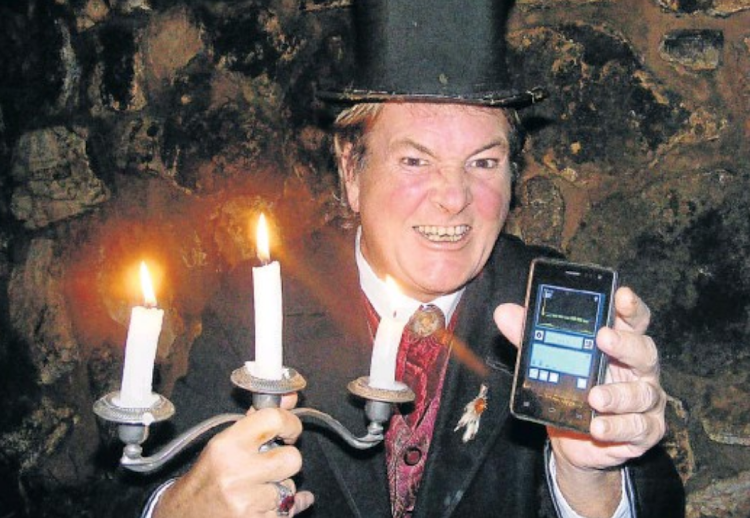 Searching for ghosts in Port Elizabeth has just become a little easier – and a lot cheaper – with those opting to take a Mystery Ghost Bus tour on Saturday being able to download a free ghost-hunting app to their cellphones.

The tour will run on the superstitious “13th” of October, the number also being the reverse of the digits of the official date of Halloween.

Mystery Ghost Bus marketing manager Gareth Holmes outlined the programme for the night and said this year guests would be shown how to download free ghost-hunting apps to their cellphones, rather than having to spend upwards of R5,000 on buying electromagnetic field meters which are traditionally used to detect ghosts.

Tour host Mark RoseChristie said: “And it really works – you can move a magnet towards your phone, and the EMF meter starts to spike.”

The most popular app, Holmes says, is “the remarkable Spirit Box, which scans radio frequencies and prints the words onto one’s cellphone screen, as they are being uttered by unseen entities in the other dimension”.

On the last tour, he said, the word “ties” appeared on one guest’s screen at the Maritime Club, which was not surprising given that ties that once belonged to Mel Channer – the most famous of the host of ghosts at the club – hang inside the library at the club.

Beginning at the News Café at the Boardwalk Casino Complex at 7pm, the bus tour passes the Old Seaman’s Mission – today the South End Museum – the Opera House and Little Theatre, and Fort Frederick.

The fort once acted as a theatre itself when soldiers stationed there staged the play Hamlet.

One of the soldier-actors is still said to make an appearance there on the anniversary date of the production.

“This is known as an Anniversary Replay Ghost, which is only one of the many types of ghosts,” Rose-Christie said.

Then it is off to the Maritime Club to have a drink before entering a room said to be haunted.

“Certainly on the last PE tour earlier this year, with the pub having by then reopened at Richly House, guests captured a group of orbs at the well-known haunted tower, where a nun is rumoured to have hanged herself after having a baby,” Holmes said.

“Ever since, owners, staff and visitors have heard a baby crying in the tower.”

One of the popular off-the-bus-stops is at Knockfierna in Park Drive, which now houses St George’s Prep school.

Once a manor house, guests had “captured a little girl on camera there”, Holmes said.

She is believed to be the daughter of wool merchant John Daverin, one of PE’s merchant princes – as many of the wealthy were called back in PE’s Victorian times.

From there the bus goes to the once prestigious old Park Hotel – today a nursing college which was started by Sharley Cribb – “with its Blue Lady and Grey Lady ghosts”, plus the tale of a gruesome murder.

The notorious poltergeist house opposite the Provincial Hospital is one of the highlights of the tour, the house having suffered 70 fires before it was razed by the 71st.

The phantoms of Grey High School are followed by the dowsing rods, with audience participation, to detect force fields at the bottom of Target Kloof, before a visit to Walmer’s most famous Spook House.

The next and final stop is the cemetery – at midnight, of course – which winds up with a surprise scare, before the bus returns to the Boardwalk Casino Complex.

Rose-Christie said the cemetery to be visited would only be revealed to those on the tour on the night.

Guests are asked to bring pub-and-grub money, torches, flat walking shoes and a cellphone for the ghost-hunting apps. They can feel free to dress up for Halloween.

Further information is available on the website www.MysteryGhostBus.co.za and the Facebook page, Mystery Ghost Bus of South Africa.