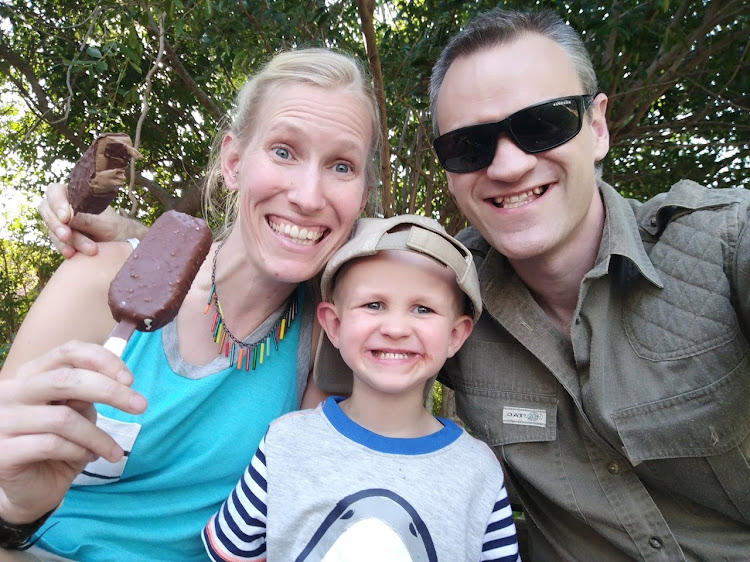 A mother and her three-year-old son are in a critical condition after being attacked by a giraffe on a wildlife estate in Limpopo.

Dr Katy Williams‚ 35‚ and her son‚ Finn‚ were attacked by the female giraffe‚ which had recently given birth to a calf at the Blyde Wildlife Estate‚ just outside Hoedspruit.

Dr Sam Williams‚ 36‚ found his wife and son being attacked by the giraffe as he returned from a trail run on the estate – a mere 150m from their family home – on Monday evening.

Explaining what had happened‚ family spokesperson Marina Botha from Botha & Lovegrove Attorneys‚ said in a statement on Wednesday that the incident had happened where Finn usually waited for his father to return from his run.

“Dr Sam Williams managed to chase the giraffe away. Dr Katy Williams and Finn were treated on the scene by Hoedspruit Medical Rescue as well as a medical doctor from Hoedspruit‚ Dr Victor Loftie-Eaton.

“The patients were transferred to a local airfield and the medical team worked relentlessly to stabilise mother and son while waiting for two helicopters to arrive from ER24.”

“The helicopters arrived … and Finn was the first to be airlifted to Busamed Modderfontein Hospital in Johannesburg‚ with Dr Katie Williams who followed shortly in the second helicopter.”

Finn underwent an operation during the early hours of Tuesday morning to release pressure on his brain related to his injuries.

“Both mother and son are stable but in a critical condition.”

Williams conveyed his gratitude to all of the emergency personal involved in helping his family‚ as well as to the management team and residents of Blyde Wildlife Estate and the Hoedspruit community for their support.

Blyde Wildlife Estate manager Riaan Cilliers said: “We are all in shock about this very sad incident and we assure the family that they are in our prayers."

Cilliers said the giraffe had a two-month-old calf‚ which may have influenced her behaviour during the incident.

Williams and his wife are both scientists with post PhD experience in animal-related fields. Sam Williams is a resident of the United Kingdom and Katy Williams is originally from the US.

Williams said‚ based on the information available‚ that he regarded the incident as an unfortunate act of nature‚ where the giraffe saw his wife and son as a threat to her calf.

The family asked for privacy “during this very difficult time”.