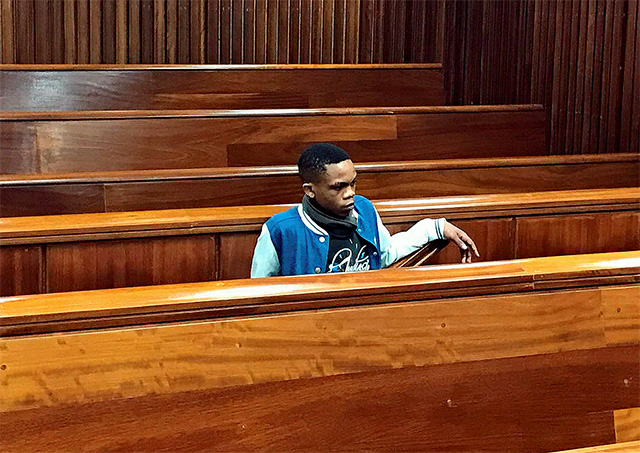 A teenager who raped a 95-year-old woman from Uitenhage before killing her was found guilty on numerous charges in the Port Elizabeth High Court on Tuesday.

Phumzile Mabope, 19, had pleaded guilty to the murder but not the rape, saying he had intended to defile Maria Vermaak’s body after her death.

Judge Dayalin Chetty, however, said medical evidence provided in a postmortem report showed Mabope had raped the elderly woman before she had died. Handing down judgment yesterday, Chetty said Mabope’s version of events in his plea did not add up and should be rejected.

“I am satisfied that the deceased was, to the knowledge of the accused, alive when he raped her and that his denial to the contrary can summarily be rejected,” Chetty said.

In his plea, Mabope claimed he had gone to Vermaak’s Luyt Street, Uitenhage, home on February 23 2017 with the intention to steal avocados from a tree on the property.

After he climbed over the back wall, he decided to enter the house after noticing the back door was open.

Mabope claimed he went to Vermaak’s bedroom to look for something to steal but upon finding nothing worth stealing he went to the kitchen to steal food.

While in the kitchen he heard Vermaak enter the house through the front door, he said.

He then hid under a bed before returning to the kitchen when he heard Vermaak leave through the front door again.

“As I opened her food cupboards, she again returned to the house.

“She opened the door to a room when I unlawfully and intentionally assaulted her by grabbing her around the neck and strangled her with my hands.

“Thereafter she fell to the ground.”

Mabope then took a telephone cord and strangled Vermaak with the intention to kill her”.

He then left the property to rob a nearby house, but later returned to collect the items he had stolen from Vermaak.

It was then, Mabope said, that he had decided to defile Vermaak.

“I thought that she was dead. My intention was to have sex with a corpse.”

Chetty found that Mabope saying he had wanted to defile Vermaak’s corpse was “entirely contrived”.

Postmortem reports further indicated that marks to Vermaak’s neck were caused by blows and not as a result of manual strangulation.

Chetty convicted Mabope on 12 charges, including seven counts of house robbery with intent to steal, robbery, rape and murder, among others.

Mabope was further convicted of four other charges of housebreaking.

His first offence was committed when he was just 16.

During his crime spree, he broke into at least four homes and a business. He was arrested on March 3 2017.

Sentencing is expected to be delivered on September 17.